A Kind of Christmas Card ... 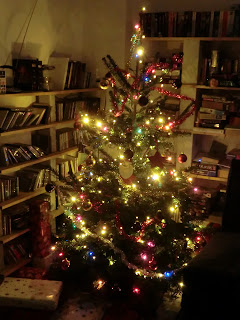 The (temporary) creative pause from posting regularly on this blog which I decided to acknowledge (or give myself – I’m not sure which is closer to the truth; probably both) is something that I’m actually finding very pleasant. Just tooling around, doing the stuff that has to be done, spontaneously doing other stuff I feel like doing, it’s all very relaxing. But then there are other things; the things that fall into that wide convergence zone between want to and have to, between can and must.

Including writing this. I’ve never been a Christmas card person, though I remember their contribution to that exciting crescendo of anticipation which is my childhood memory of December, the expectation which is the very soul of the season known as Advent. Back in the day; a pre-digital age, a time when we didn’t even have a telephone (imagine that, if you can!) so that communication between people who didn’t meet regularly was limited to pen and paper, envelopes and stamps, and a postman on a bicycle.

They came daily through our letterbox, first a trickle, increasing to a daily flood as Christmas grew nearer. I remember my mother making a long list of people, buying cards and sheets of stamps and then writing them all. A few would be left in reserve to be sent to those from whom cards were received who had been forgotten on the original list.

And the cards poured in, being opened and set out on every available surface, when these were all used up hung from the walls or ceiling on string catenaries. We use to decorate the house for Christmas in those days too, paper and tinsel chains and garlands hung from the ceiling. As a kid I loved it all; it turned the familiar geography of our living room into a wonderful world of glitter and magic, ruled by the twin sovereigns of the Christmas tree and the crib, Mary and Joseph, the ox, the donkey and the shepherds all gathered around a central empty focus, that space where the baby in the manger would be placed on the evening of Christmas Eve, the first certain signal that Christmas was actually, inevitably here.

I don’t know if people still decorate their living rooms in Ireland today they way they used to do when I was a child. I suspect that fewer do – increased sophistication and a more developed sense of kitch are always purchased at the price of a certain innocent naïveté, and one of the basic facts of temps perdu is that it is like virginity, once lost it is irretrievable. Maybe this is one of the deeper reasons why so many adults are ultimately so often disappointed by Christmas; it is a seductive, insatiable longing for the innocent joy of childhood – a joy which, if truth be told, was probably never as unalloyed in reality as memory likes to present it. But memory is inclined to do that, isn’t it?

However, I realise that my thoughts are wandering in a direction which I had not planned, a direction with intimations of more darkness than I want in this … this what?

I started this by mentioning that I’ve never been a Christmas card person – after I left home, where such things fell primarily in my mother’s area of responsibility, I somehow never managed to make the exercise part of my own personal self-organisation. For too long, I suppose, I was intoxicated by the ephemeral, self-centred, invulnerable immediacy of youth, for too long afterwards I was involved in struggling with my own private demons and the trip-wires they had been busy installing for me in my life.

It’s well over a decade now since I managed to banish most of those demons, or at least to cage them so securely that they can no longer urgently threaten my life or my happiness. In those early days of putting my life back together again I realised the importance of friends and people who love me, and it became clear to me that the ordinary rituals of keeping in touch, however fleetingly, are an important part of nourishing those relationships.

Although I realised that the sending of Christmas cards is one of these important rituals, I consciously decided not to take that way. There had been too many caesuras in my life, too many friends for whom I had no longer addresses, for many of whom I had no contact details whatsoever. But the realisation of these losses, and the personal impoverishment they had given rise to, fortunately coincided with the spread of general digital connectedness at the beginning of the new century.

I had started to renew contact with many old friends, often using the internet to find them. And, as more and more people acquired e-mail accounts, I decided, instead of sending Christmas cards, to commit myself to the new virtual reality and send a longer personal e-mail to all the friends who could be reached by means of a web-tag containing that old mercantile symbol - @.

So, for many years now, I have been writing my Christmas e-mail. But the digital world changes, changes, changes, and my use of it changes too. In the past decade I have made many new acquaintances and established a number of what I regard as real friendships with people whom I have never met in real life. There are people, old friends and new, people all over the world, with whom most of my regular contacts now take place through various social networks; facebook, Google+, blogger, wordpress, and all the other virtual equivalents of the Irish pub, or the 18th Century coffee house.

Therefore, my friends, I have decided to move my Christmas mail here this year. And all of this has been nothing more than my usual rambling, roundabout, long-winded way of getting around to wishing you all a very happy Christmas.

Over the past couple of years I have published a number of essays here on Christmas and I feel no urge to repeat myself – if you really feel like reading them, just type “Christmas” into the search bar on the right of the page. But there was just one idea that occurred to me, which I would like to share with you.

In the Christian version of the much older urge to celebrate mid-winter/new year which seems instinctive to humanity in the northern hemisphere, the angels sing of “peace on earth.” There is something deeply quiet, inherently peaceful, about these shortest days of the year, when nature sleeps and we follow a deep urge to seek sharing and harmony with those we love. It is, perhaps, this longing for fellowship, generosity and solidarity which we try to express in the circle of our loved ones at this time which makes all the violence, injustice and needless pain which humans are capable of inflicting on each other appear so particularly horrible and useless. Whether in Newtown, Connecticut or Aleppo, Syria, in Timbuktu, Mali or Bethlehem, Palestine, the wrongness and futility of violence, hatred and killing strike us particularly at this time of year.

This Christmas, my friends, I wish you and me, us all and the world peace. Peace in our hearts, in our families, our communities, and our countries. Peace on earth. A wish as unfulfilled now as it was two thousand years ago. And yet, a wish still worth wishing. Maybe our wishing it – our really wishing it – is the only thing which stops us from finally and completely destroying ourselves.

Posted by Francis Hunt at 21:54 7 comments: Links to this post