The Sad, Mad World we Live in

Do you know the feeling, that feeling of anger and disgust at the amount of fucked-up stupidity, evil and hopelessness in the world? 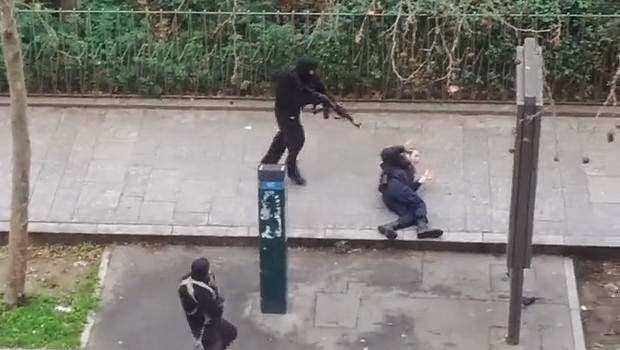 Today a couple of (almost certainly) Islamicist fanatic terrorists attacked the offices of the French satirical paper Charlie Hebdo, killing twelve people. There is video coverage online of two gunmen shooting a policeman down in the street and then finishing the execution with a headshot, even as the man on the ground raises a hand, possibly in a last plea for mercy. It’s horrific in its brutality so I’m not going to post a link to the video itself here. The photo shows enough.

Charlie Hebdo is not a particularly pleasant newspaper; but that’s not what its makers want it to be. It is relentlessly satirical, regards nothing as sacred, and is prepared to lampoon anyone and anything in the news, be they pope, prophet or president, moron, mullah, or messiah. That’s their job as they see it. And it’s their right in a free, pluralistic, secular society. If you don’t like what they publish you don’t have to buy it or read it. If you feel personally damaged by something they publish you can sue them. That’s the way a civilized society works, particularly a civil society which sees freedom of expression and the press as a basic value.

One result of this barbaric event will certainly be calls from the populist (partly proto-fascist) right in France (led, no doubt, by Marine Le Pen and the Front National) and worldwide for clampdowns on Islam, and Islamic foreigners, and foreigners generally; migrants, refugees and asylum seekers. The usual cacophony of ignorance, fear- and hate-mongering. Indeed, this may have been one of the perverted, calculated aims of the mad, evil bastards who planned and carried out the attack.

Here in Germany in the past number of weeks we’ve been treated to the dubious spectacle of thousands of ignoramuses marching every Monday night in the streets of Dresden under the banner of a strange organisation calling itself PEGIDA [Patriotic Europeans Against the Islamization of the West]. According to the Saxon Interior Ministry in 2010 0.1% (around 4,000) of the population of Saxony (of which Dresden is the capital) describe themselves as Muslims [Source: Spiegel Online]. Biiiiig threat. Last Monday night, as a sign of some hope for sanity in my adopted home-country, thousands of people marched in Cologne, just a few miles down the road from me, in favour of tolerance and an open society. Cologne has 120,000 Muslims out of a population of around a million. For those who can’t do the math, that’s 12%. Around a hundred times higher than in Saxony.

Personally, I’m not a great fan of Islam. But then, I’m not a great fan of evangelical Protestantism, traditionalist Catholicism, neo-liberal free-market capitalism, or Justin Biber either. This nevertheless doesn’t mean that I would ever contemplate or tolerate any calls for or moves to forbid people their right to believe whatever they want to and to freely profess and express those beliefs, however idiotic I may consider them to be. This freedom is one of the constituting principles of a humane civil society. It goes further; even people who profess beliefs abhorrent to these constituting principles – like, I am forced to conclude, quite a number of those marching in Dresden – have a guaranteed right to do so, as long as they don’t resort to violence, or incitement to violence, against others. That’s what a humane civil society has to be able to tolerate and, I have no doubt, any healthy civil society is well able to withstand the irritation caused by such misguided fools.

Of course, that does imply that those of us (the vast majority, I like to think) who value these basic principles of humane civility sometimes have to speak out for them and defend them.

A journalist friend just told me the story of an initial interview she did this afternoon. It was with a young man who’s been in Germany for four years now. He was born in one of those war-torn countries we frequently hear of in the news but his family fled terror and conflict when he was a child, finishing up in Iran. He spent seventeen years there and managed to obtain a degree in computer-programming before realising that, as a stateless person with no official identity-papers, he had no future in the mullah-dominated Islamic Republic. His mother sold the last of her jewels to provide the necessary money and he (alone of his family) made a long, dangerous, illegal journey, culminating in a frightening boat-trip across the Aegean from Turkey to Greece before finally ending up here in Germany four years ago.

In Germany he has the status of a tolerated (but not recognised) asylum seeker. He still has no legal papers, so that his “official” status, such as it is, can be described as stateless. Inquiries at the embassy of his native country have resulted in no practical prospects of ever getting a passport. He is given enough to live on – barely – in Germany. He is not allowed to work, although he has good training in a field where his skills are demanded everywhere. His freedom of movement here in the country is extremely uncertain, since he has no official papers. Without them he cannot open a bank account or make a contract for telephone and internet access with a telecommunications provider. He spends his life in fear of police controls, of suddenly being thrown out of the country. He has little hope for the future and has been suffering – increasingly – from depression.

This is someone who only wants to live an ordinary life, someone with the skills and potential to offer a positive contribution to any society which would welcome him.

The way our world is so screwed up, it doesn’t look like he’ll be welcomed anywhere.

That humane civil society I was defending earlier in this essay still has a long way to go.

Picture source: http://www.cbsnews.com/news/charlie-hebdo-french-satirical-magazine-paris-office-attack-leaves-casualties/
Posted by Francis Hunt at 20:42 No comments: Links to this post