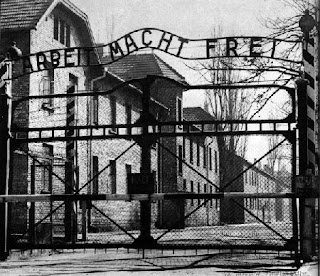 Ideas and themes swirl in a complex, confused cloud around me. Rarely enough, beginning to write this, I have no idea where it’s going to go. Sixty-six years ago this week, was liberated and the ghastly reality of what the Nazis had actually been doing to the Jews (not to forget other groups too, like the gypsies) started to become clear. A few evenings ago, following the death of Bernd Eichinger, the film producer, German TV showed the 2004 film Der Untergang (Downfall), his masterpiece about the last days in Hitler’s bunker in April 1945.
I do not find it easy to write about evil. Oh, I have no problem sounding off about things I regard as being wrong, or stupid, or incompetent. I don’t even have great problems about taking the position of the moralist; letting rip at the (often criminal) deficiencies of the great and the powerful and the damage they do in the world. But, at the same time, I suppose I tend to see such things generally as the result of weaknesses, short-sightedness, selfishness, lack of intelligence, vision or moral maturity – all the imperfections to which human nature is heir and which are part of our basic make-up. But evil is something else – a difficult, uncomfortable and amorphous subject for people like me with a rational, liberal bent. We tend to think that we can explain and understand everything; that if we approach things more sensibly, with more tolerance, openness, intelligence, generosity and humility, most problems can be solved.
It is the way we generally approach things in our modern world, an enlightened approach, an approach which is the root of most of the genuine advances humanity has made in the past few hundred years. It is, in my view, preferable to the alternatives humanity has tried; the various theocracies, dogmatic ideologies and unquestioning loyalties with their versions of absolute truth, their anathemas, persecutions and exclusive righteousness. And it is an approach which comes up short – baffled and silenced – when suddenly faced with the reality of evil.
Many years ago I visited . It was a beautiful summer’s day and the whole place seemed still and peaceful. In the chaotic, oppressive political uncertainty of in the mid-eighties, there weren’t the throngs of visitors the place gets now. We saw the barracks, and some ovens, and the execution place of Maximilian Kolbe and then moved on to the photographs and exhibits. There were huge glass display cases filled with suitcases and satchels, with clothing and human hair. And then we came to a case full of children’s shoes and boots and suddenly the dimensions and the horror of the evil whose traces we had been seeing became clear to me. I remember just standing there, unable to go on, silently weeping. Faced with this kind of mute testimony of sheer inhumanity, words, concepts, everything fails – just aren’t enough … inexplicable, incomprehensible.
Tragically, even such examples don’t seem to be enough to teach us, as more recent events in , , and show. Confronted with such examples we are stunned, speechless before the reality of the evil of which our species is capable. And we ask ourselves how such things can happen.
It would be easy to proffer some kind of diabolical explanation; satanic power overwhelming basic humanity, dehumanised, possessed beings raging through the world perpetrating unspeakable horrors. But this is not how it happens. Watching Der Untergang a different – in many ways much more disturbing – picture emerges. One of the great strengths of the film is that all the characters work as real people, even the most horrific ones like Magda Goebbels and Adolf Hitler. On consideration, I believe only Germans could have made this film and it is no surprise that sixty years had to pass before it could be made; it took this long for German people generally to reach the stage of honest detachment from their horrific definition through the Nazi past and at the same time retain the familiarity to make the film work. The vast majority of Germans alive today can no longer remember the war, yet they know that this is the world of their parents and grandparents – even if those generations were not particularly willing to talk about it (but that’s another story).
There were doubts and some criticism expressed in (the great director Wim Wenders being a prominent example) when the film was released about the risk of showing Hitler and the others as “real” human beings. Reservations which were understandable but, in the end, unfounded because (in my opinion) the film manages to successfully walk the tightrope.
The critic Roger Ebert puts it very well:
Admiration I did not feel. Sympathy I felt in the sense that I would feel it for a rabid dog, while accepting that it must be destroyed. I do not feel the film provides a sufficient response to what Hitler actually did, because I feel no film can, and no response would be sufficient. As we regard this broken and pathetic Hitler, we realize that he did not alone create the Third Reich, but was the focus for a spontaneous uprising by many of the German people, fueled by racism, xenophobia, grandiosity and fear. He was skilled in the ways he exploited that feeling, and surrounded himself by gifted strategists and propagandists, but he was not a great man, simply one armed by fate to unleash unimaginable evil. It is useful to reflect that racism, xenophobia, grandiosity and fear are still with us, and the defeat of one of their manifestations does not inoculate us against others. 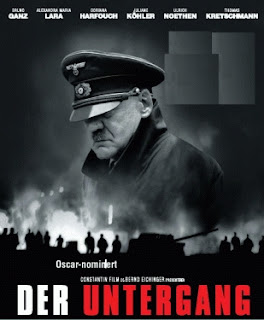 We can watch Hitler (brilliantly played by Bruno Ganz) being charming, worrying about his dog, and even showing kindness to his uncertain new secretary without abandoning our fundamental moral disgust. We can understand the internal twisted reasoning which leads Magda Goebbels to kill her six children in one of the most ghastly heartrending scenes ever filmed, while not in any way surrendering our horrified repugnance. But, as Ebert points out, the film also makes another – in many ways even more horrifying – point with its depiction of the dozens of “ordinary” characters in the film. They all work as basically decent human beings, showing acts of individual kindness, humanity, even heroism during Hitler’s final ten days, at the same time as they are all (more or less) willing collaborators in a system of gruesome moral depravity.
Which brings me back to and my uncomfortable question about the nature of evil. Reflecting on Der Untergang, I find myself coming to the conclusion that there is, in fact, nothing particularly special about evil except its dimensions. It is, in the end, only “normal” human flaws written large, cosseted and nourished, worked through various levels of magnitude, pushed to their logical conclusions. What starts as the very human tendency to refuse to take responsibility for our own mistakes and failings moves along the easy path of giving others the blame; solidifies around suspicion of those who are other, different; becomes institutionalised in attitudes like anti-Semitism; until finally particular historical circumstances make the Shoah possible.
The story of Faust and Mephisto is, in the end, much too dramatic. We do not exchange our soul for the world with a signature in blood, given on a dark and stormy night, abandoning good for evil with a portentous symbolic act. Instead, we deny incrementally, in tiny steps, the responsibility for our deeds which is the inevitable consequence of that freedom we claim for ourselves. Or we surrender, piece for piece, that freedom to others because we find the responsibility too hard. Either way, the result is the same – Mephisto collects his signature (and the soul it signifies), only not given at once but gathered through many little, often unwitting, pen-strokes over time. Evil does not spring fully-formed into existence; it grows instead like a mould, feeding on all our weaknesses and faults, sending out myriad, often largely unseen tendrils until it finally poisons a personality – or a whole society.
Posted by Francis Hunt at 16:43