It’s four in the morning and I’m on the night shift. Things are quiet; the five children who are my charges are all sleeping peacefully. I’ve just been outside for a cigarette, leaving the door slightly open so that I can hear the signal, should any of the monitors to which they are all attached give alarm. 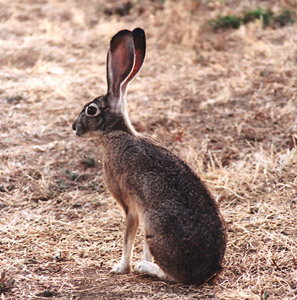 Though our little group is housed in the middle of the city, it is quiet outside. The night is slightly misty, the temperature three or four degrees above freezing point. There is plenty of light; street lamps, the neon signs on the big shopping mall next door, the illumination of the city theatre across the way. Between our little garden and the theatre is a small playground. Looking across just now, I spotted a what looked like a fat rabbit grazing on the grass between the swings and the climbing-frame. From time to time he raises his head, his ears twitching. Has he registered my presence? I move towards the fence, the distance between us finally around five metres. Now he has seen me. He raises his head head once more, looks briefly towards me, then hops slowly away. He doesn’t seem particularly concerned. Caught for a moment in the stronger light of a street lamp, I can see him even more clearly. Now I realise that my initial judgement was mistaken – from his greater size and the shape of his tail, I can see that my night-time acquaintance is, in fact, a hare.

An old acquaintance, then. I have seen him before, in the dawn light of April. Then he was much livelier, gambolling on the grass, as they are wont to do in spring. Now, as winter approaches, his life is quieter, its most dominant aspect being the need to silflay as much as possible before the dark, hard, hungry season gets into its stride.

Posts on this blog have become a bit more seldom of late. Exactly why, I am not sure. I have been playing around with a couple of ideas in my head, have even started writing about a few before giving up on them. Bored with my own ideas before I have even worked them through? Perhaps.

I feel an urge to create something special, something beautiful. Some kind of instinct to make a leap forward, move to another level, without being clear about how to go about this. Writer’s block, creative logjam, perhaps a slight attack of plain old laziness? Maybe a combination of all this, along with a significant amount of something else, some kind of factor x. If I actually knew what it was, then I might be able to do something about it.

I feel two conflicting instincts with regard to dealing with this. The first is the generally excellent piece of advice; If you’ve got nothing to say, don’t say it. Surfing the web recently I’ve been struck by a sense of how much useless, superfluous bullshit is out there. Maybe it’s just a side effect of the US presidential campaign. Although I am an Irishman, happily living in Europe, I have the feeling that, all around the globe, you’d have had to be blind, deaf and terminally stupid not to realise that the USA was choosing a new (actually re-electing the old) boss. A cacophony of shrill attempts at persuasion – of whom? A few hundred thousand voters in a couple of swing states who finally decided the election? Was all the rest of it then just the convinced preaching to the converted, modern versions of the indignation, shrieking and threatening gestures between two rival groups of monkeys meeting in a disputed forest clearing. Ritualised hind-brain aggression, formally channelled to let dangerous instinctive feelings bleed off without anyone getting the shit beaten out of him, or even killed. And in the course of this, the two tribes involved spent up to six billion dollars. Not to mention the millions of words churned out in blogs, Facebook posts and tweets. What a way to run the world! And why on earth should I add anything more to this strange circus? 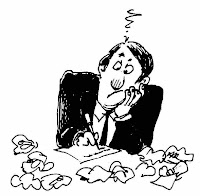 The other instinct is to just start writing without any clear idea about where it’s going to go. Just type away, immersing myself into the stream of ideas swirling in my head, reflecting my own subjective perception of all the concepts and impulses and stimuli churning around in my own particular personal and cultural environment and see where it takes me. Which is, more or less, what I am actually doing now. Some kind of intuition that I generally do have something to say; one of the basic purposes of this blog being the ongoing attempt to work on how I say it – learning by doing, honing whatever kind of ability I have to create something (however modestly) worthwhile, combining form and content, media and message, into that flexible and somewhat amorphous literary category known as “the essay.”

Writing, formulating my thoughts and ideas, just doesn’t flow easily for me at the moment. That … hesitancy … I mentioned at the beginning of this piece is still there, a feeling that that I’m trying to carve this out of hard wood, with tools that aren’t sharp enough. I’ve been writing this on and off (more off than on) for more than a week now, finding myself taking directions which I then subsequently revise and ultimately reject. They don’t quite fit, though (thanks to the possibilities offered by writing with a computer) I can save these rejected fragments to perhaps revisit and use later.

One of the memes which seems to be flashing about at the moment is that of stories. Narratives. Even President Obama took it up in his victory/acceptance speech the other evening. We structure the world in which we live by creating narratives, telling stories. Crises occur in societies when narratives no longer work, when the shared collective stories become unbelievable, incapable of providing a coherent explanation of past, present and future – from families all the way up to nations.

Since 2008 the global economic story has been in fundamental crisis, a crisis much deeper than the “crash” itself. The general consensus on an economic meta-narrative, told in the language of markets, the belief in the story of the Invisible Hand guiding all to the best of all possible prosperity through free, unregulated markets, is breaking down, along with many of its themes, such as Trickle Down or Unlimited Growth. In the midst of all the doom and gloom there may just be a small hope that we can build better stories; new narratives, based perhaps on values other than those of economic worth, such as decency, morality, solidarity.

I know, I have a strong personal tendency to (unjustifiable?) optimism. Or maybe just hope.

Personally, I have also reached a stage in which I am increasingly examining my own narratives. One result of the Burnout I went through a year and a half ago was a decision to go into psychoanalysis. Currently in the middle of this process, I find myself at a point where I feel the urge to say less and listen more – to others and to myself. I have no intention of going deeper into details here – it is a process which I consider to be intensely private – but there is one realisation which I am prepared to mention. I have a tendency in many areas in my life to turn “can” and “want to” into “must” and “have to”. It is a personal characteristic I don’t particularly enjoy and one I hope to be able to give less power to in the future. Writing here is something I do because I enjoy it, because I want to do it; I will not allow it to become something I feel I am doing out of some kind of obligation.

There are themes I have briefly mentioned here which I intend to come back to; particularly that of narrative. But for now, in common with my long-eared friend, the meeting with whom I described at the beginning of this, I feel the need to listen more and, perhaps, say less. So there may be fewer posts here in the next while. But those that I do publish (and I have no intention of abandoning this project) will appear because I wanted to write them, not out of any sense that I had to publish something.