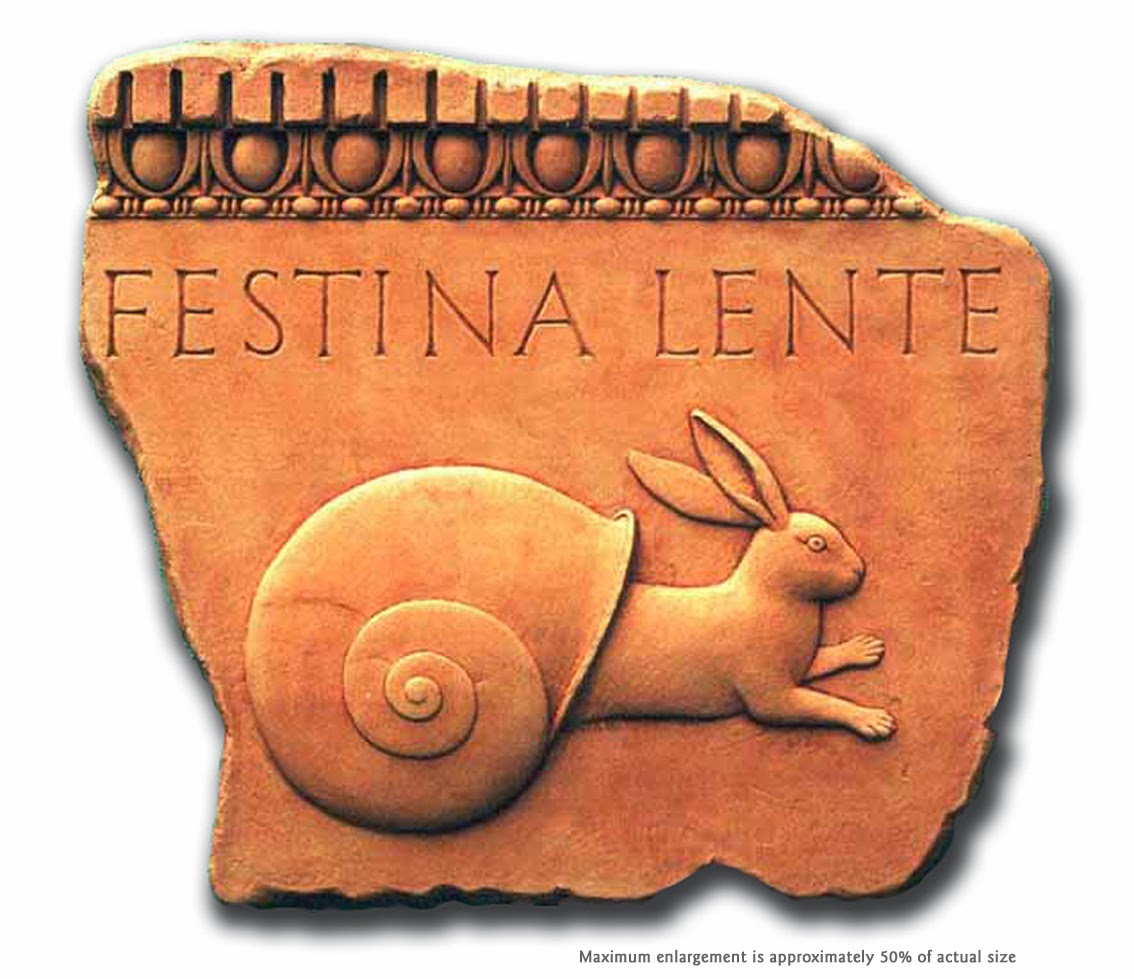 I have started to practice walking slowly.

As a little boy, around fifty years ago now, I decided that there was something virtuous about walking quickly. I suspect that this is a common phenomenon among little boys who go walking with their fathers; fathers have longer legs and just cover the distance faster. And therefore, because little boys look up to their fathers and want to be just like them, they decide that it must be good to walk quickly.

At any rate that’s the way it happened with me. Walking was primarily a way from getting from A to B, and it was obviously advantageous to do so as quickly as possible.

As an adult, many years later, I discovered another use for walking; exercise. In a society in which we have become increasingly conscious of things like cardiovascular performance, body-fat ratio, the potential health dangers of obesity, overeating, and a too sedentary life-style, keeping physically fit has taken on many of the characteristics of a religious proscription. To admit, as I do, that I find every kind of sport (personally practiced – being a spectator is something quite different) supremely boring is comparable in many circles to someone confessing in medieval Spain that they were a Jewish atheist with an interest in witchcraft.

Walking then was something I saw as a possibility to combine the necessary with the useful. If I did have to walk somewhere, then the thing was to do it as quickly as possible; get the old circulation working, push the heart-rate up, get the muscles flexing and bunching, burn up some of those endless extra calories which would otherwise (in a lipid form) congeal around the waist-line or (more dangerously) within the artery walls.

Necessary. Useful. But never really pleasurable. The idea of “going for a walk,” something millions of people unselfconsciously accept as a normal form of recreation has never really appealed to me. I have always tended to see the time needed to get from A to B as a period to be practically and rationally managed in order to reduce it to the minimum possible. Which meant that if I was going to walk anywhere I planned the time necessary on the basis of a brisk – a very brisk – walk.

Last April I moved house. It was a project which was quite significant for me, in all sorts of ways, most of which I won’t go into here – not now anyway. But one aspect of my move was that my new flat was much more central than my old one. And as the summer bloomed and I finally started to feel settled in, I made a resolution; with butcher, baker, supermarket and pharmacy all just a few hundred yards away, and my place of work only a fifteen minute walk distant, I would consciously strive to walk when I could – thus ensuring a minimum of exercise and even massaging my liberal light-green conscience about the size of my carbon footprint.

Life was good, and the future was bright, bright. Only by the end of August I was forced to the realisation that I had slowly, unknowingly been slipping ever deeper into a condition which I knew all too well. Knew intimately and still not recognised in its insidious approach, even as it dug its talons deep into my soul.

I have written about depression on this blog before, a number of times, and I don’t want to go into too many details about it; it happened, it was bad, I’m slowly coming out of it again. The frightening thing about this episode was that there was no real reason for it – everything was okay, I had the feeling that I was in control of my life in a way which I hadn’t been for years. In retrospect I was able to identify certain factors which had possibly (probably?) triggered it, but I have had to face up to the unpleasant likelihood that this is a condition to which I am simply prone. I have to accept that it may happen again, and that there is little I can do to prepare for it, except practise a certain kind of relaxed watchfulness so that I am not quite as blindsided as I was this time.

Indeed, in writing this it strikes me that the roots of this last episode may be even farther in the past than I have realised up to now. It is well over a year since one of my creative wellsprings started to dry up – by this I mean my inclination to write. My essays here became more seldom, and harder to write. If I had had to explain it last April or May, I would have simply said that it was due to the increased busy-ness and heightened stress involved in moving house, a few months later, when I finally accepted that I was at the bottom of a very deep pit, the idea of writing was simply unthinkable. If this is really the case, then the fact that you are reading this is a sign that I am well on my way back to the light (though I’ll make no promises about how long it will take for me to post the next essay!).

But even at the worst of the depression in September I still walked. On the occasions when I had to leave the flat, something I found hard to do, I marched forth, desperately striding to an appointment or to the supermarket to buy groceries.

And then one day, returning from a session with my therapist (seven and a half minutes brisk walk away), I realised something. There was no reason to hurry. I had nothing planned for the rest of the day. It didn’t matter a fucking toss whether my walk home took a few minutes longer. It was a beautiful autumn afternoon and the more my pace slowed, the more I found myself appreciating it. In a seeming inversion of the logic to which I had chained myself, the more leisurely I walked, the more time seemed available to me. And the more time there was available, the more my racing thoughts slowed, my mind moving into a freer, more relaxed space, a space which it had so desperately longed for and needed.

It was not a miraculous, spontaneous healing, that would be a drastic exaggeration. It was, rather, an intuition, an inkling, a brief glimpse of a reality different to the negative, worried, obsessively and futilely circling inner world in which I was captured and held.

Like most such inklings, this one was quickly gone. I completed my short journey home (walking slowly) and then forgot the experience. But the next time I was returning from a therapy appointment I remembered it once more, and once more I slowed down. I remember consciously deciding to generally walk more slowly when I was returning home from therapy.

Initially, my thinking was still typically purpose driven. I found myself formulating the explanation that I was giving myself this extra time afforded by walking more slowly to reflect on what had happened during the hour of psychoanalysis, what insights I had achieved, how the whole process was progressing. An opportunity to increase the value of the session, to retrospectively continue to mine the depths just plumbed. For I am, indeed, a typical child of my time and culture, formed by and embedded in a world obsessed with development, with efficiency, with optimizing, doing things better, and faster, and more comprehensively, and (usually presented as the most important of all) more economically.

Only, I found myself gradually realising, it wasn’t true. The therapy session may have been very productive, I may have found myself suddenly exploring a whole new area of my psyche, or achieving a wonderful new insight about the way I tick, but I wasn’t using the more “relaxed” state of consciousness I was achieving by slowing down on the way home to reflect on and deepen the therapeutic experience I had just gone through. Instead, I was using it to do … nothing. Oh, I might start thinking about something, but, I realised, my thoughts usually petered out, spreading out and thinning before vanishing into emptiness like the fractal silhouettes of the leafless winter trees I found my wandering gaze idly and momentarily focussing on before moving on.

I have started to expand the experiment. I no longer just walk slowly when I’m coming home from therapy; I now try to do it whenever I’m walking somewhere without a definite time that I have to be at my destination. Which means, for example, that I continue to walk briskly to work but when I walk home from work I do it slowly.

I usually work the night shift, which means that my journey home takes place around 7.30 in the morning. It’s an interesting time to be on the move if you have the leisure to do it slowly in a relaxed way. There’s a grammar school on my street, and a primary school at the end of it (and German schools generally begin their day at around 8.00 a.m.) so there are lots of kids underway, the small ones lugging bags on their backs nearly as heavy as themselves, most of the older ones in groups practising and living the all-important and ever-demanding teenage attitude of cool. A splash of headlights, brake-lights and rushed activity in front of the schools as hordes of parents fulfil that basic, most essential parental duty, being a taxi-driver for their offspring, the cars backing up behind halting school-buses. Adults on their way to work, moving determinedly, their faces generally closed and concentrated. At this time of year it’s dark when I begin my way; by the time I get home the sky has lightened and the day has come. And I’ve found myself noticing and rejoicing in the fact that, as the planet precesses on its cosmic path deeper into 2014, the dawn begins a few minutes earlier from day to day.

It still doesn’t come naturally to me; this strange exercise of walking slowly. The habits and attitudes of a lifetime are deep, and I often catch myself unnecessarily striding forward and have to remind myself to slow down. But maybe, for me, walking slowly is something like playing the piano or learning to drive a car; something I have to practice quite a bit before it starts to come easily or naturally.

It’s a mild January afternoon as I finish writing this – the sun breaks out frequently from behind a scattered cloud cover.

I think I’ll go for a walk.


There were lots of musical options for this topic; Dionne Warwick, "Walk on by," Fats Domino, "I'm walking," Katrina and the Waves, "Walking on sunshine," etc. In the end, it had to be Lou ...


Images sourced from:
http://www.pittsburghlegalbacktalk.com/wp-content/uploads/2013/08/FestinaLenteCorrect.jpg
http://johnesimpson.com/blog/2012/02/sitting-silent-open-minded/ This quotation is most often - incorrectly - attributed to the baseball player Satchel Paige. Some say its author was the great philosopher, Winnie the Pooh (sadly it isn't, though it suits Pooh). In fact, the first use of it seems to have been in this Punch cartoon, over a hundred years ago.