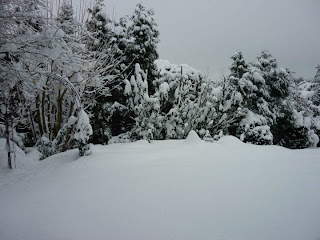 It’s been snowing on and off (more on than off) in most of Europe north of the since the beginning of December. This is quite unusual so early in winter although all the experts assure us that this allows us to say nothing one way or another about the theme of global warming; what this is has nothing to do with climate, it’s just weather.
I live on the north-western edge of the so-called Mittelgebirge, the connecting chain of low mountains which run from west to east across central Europe from the Ardennes in to the Carpathians in and . This geographical fact means that any moist air coming in from the west, the north-west and the north is forced upwards in the atmosphere and the meteorological-physical result of this phenomenon is cooling which gives rise to precipitation. In layman’s language, rain. Quite a bit of it; the Duchy of Berg, east of Düsseldorf and Cologne and south of the Ruhr area, where I live, is one of the wettest in Germany. If the air is cold enough – as it is this year – this rain comes down as snow. On us.
Just weather, like I said. And, to be fair, all of northern Europe has got its fill of snow this December; on Sunday thousands of travellers were stranded at airports in , , Burssels, Düsseldorf, , etc. and as I write, they’re still not all back to normal. But we have been particularly “blessed,” and in the past three weeks we’ve had nearly a metre of it all told – two or three heavy storms and a lot more falls of 2 to 5 cm. in between, and as the temperature has hardly risen much above the freezing point in all this time, very little of it has thawed away.
We get snow almost every year for a couple of weeks, so – unlike France, Britain and Ireland – we’re basically equipped to deal with it; the towns and counties have snow-ploughs and salt and grit spreaders and motorists are legally required to have extra winter tires for their cars. But being used to it and able to deal with it does not mean that it isn’t inconvenient in all sorts of ways.
One of the major issues from my point of view has to do with driving or, more particularly, parking. I live in a nice flat in an old building directly on the street and I don’t have my own parking space. It’s not usually a problem because there is enough room on the street and I seldom have to walk more than a couple of metres to my front door. Unless it snows. All that snow which the ploughs push off to one side to clear the street, all the snow which has fallen on the cars, all the snow on the sidewalk, it all has to go somewhere. So the more snow there is, the more snow is “parked” in metre and a half high piles on the side of the street and the less room there is for cars. And if there’s been a heavy fall of snow this means that you invest quite an amount of time and energy digging your car out of its parking space, clearing the space so that you get out of it easily and safely, drive away to do whatever it is you have to do and return … to find someone else has parked his or her car in the space you spent so much time and effort clearing. But it’s a public street, which means you don’t have the right to reserve a parking space, even if you’re the one who cleared it.
So, late Sunday morning, having had a long struggle with my lazy side which was insisting that it was weekend, that I’d been working a hell of a lot recently and that this was my first free weekend for quite a while, that it would be much nicer to potter around, surf the internet, read a book, etc., etc., I manfully pulled on winter gear and went out to dig the cars free. Cars, because my daughter, who lives with me, has had her own now for a couple of months too. I shut my lazy side up with the argument that it was better to do this now, without any pressure or stress, than to have to do it early the next morning. Lazy side reluctantly accepted this argument but continued muttering in my subconscious with the effect that my enthusiasm for the whole business was less than optimal.
It had snowed fairly heavily on Saturday night and, to make matters worse, my daughter hadn’t used her car for a couple of days so that it was hardly recognisable under a lot of snow. As an extra flavouring for the whole situation, the snow-plough had been through the street and shoved a half metre ridge of dirty, partly compacted snow to the side – between the cars and the road, in other words. Oh joy, I thought, this is really going to be fun! I took the snow shovel and started to move masses of snow. 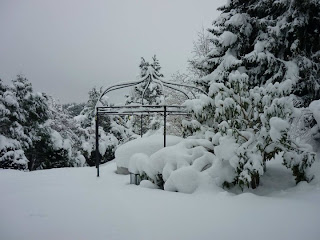 And then, somehow, I can’t say after how much time, it happened … I was there, completely immersed in the simple job of physical work I was doing. The resentment at having to spend my precious free time shovelling snow in the cold was gone, the consciousness of the time it was taking had disappeared, all the other things which had been occupying my mind were absent. Just me and the job to be done, the work I was doing, were left and I was united with it; acting in the moment, thought gone, feeling gone – just the observation of the next shovelful, the judgement of how to take it and where to throw it, the doing of it and on to the next one. Time was suspended, the world was suspended, there was just me and the snow until there wasn’t even me and the snow any more, just the doing.
This phenomenon, the state of becoming one with the task you are doing so that the task and yourself and the goal of the work all disappear until only the doing remains was described as karma yoga in the Bhagavad Gita, at least two thousand years ago. It is the basic thrust of such activities as archery or pottery or flower arrangement (or motor-cycle maintenance!) which are taught by the Zen . The same kind of insight is also at the basis of most serious martial art techniques. It is, at least to an extent, something which one can practice.
But it is also a kind of blessing which can come unbidden and is beautiful when it does so. After more than an hour I came out of the work-trance and both cars were cleared with enough snow removed and space made to drive them without a problem onto the street. My muscles were aching and I was drawing breath hard but I felt good and at peace. Part of it, no doubt, was the simple satisfaction of a job well done, but more was a lightness, a feeling of having let go of a lot of negative rubbish (just the ordinary, everyday stuff) which had been accumulating, a sense of being cleansed, an intimation of serenity and wholeness. Contented and in balance I put the shovel away and returned to my flat.
* * * * * * *
Two hours later it started to snow again …
The photos in this post were taken by Chiara Meier and are used with her permission
Instead of the usual rock music, here's a beautiful video of the northern lights, originally posted by Susan on her blog phantsythat. Watching it in the full.screen version can really be recommended!
Aurora Borealis timelapse HD - Tromsø 2010 from Tor Even Mathisen on Vimeo.
Posted by Francis Hunt at 02:14