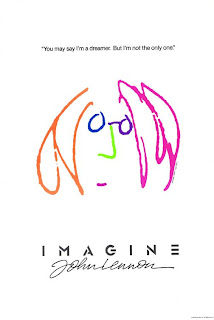 Last Saturday being John Lennon’s 70th birthday, I put up a link to “Imagine” on Facebook. A few hours later, Ian, a friend of mine in England (one of those virtual ones I referred to here recently, whom I haven’t yet met) added a one word comment – “Overrated.”

Overrated? I thought. Bloody too-clever-by-half, elitist English gobshite! How could John Lennon be overrated? That’s as unimaginable as … as … as a bishop abusing little children! And then, having overcome my shock at this expression of heresy most dire, I started to think about it. Has the world, have I overrated John Lennon, one of the few heroes I have had in life?

Ever since I became aware of modern pop and rock music, sometime around the age of ten, the Beatles were always right up there at the top. Even then, my feelings of admiration and awe for them was intensely mixed with one of deep regret that I had been born too late, discovered them too late, for they were already part of the past; they had broken up in acrimony and there seemed to be little concrete chance of a reunion, although you could always hope.

The quartet from Liverpool were all fab in their own way; Ringo was funny, George was a cool guitarist, Paul wrote great songs (although there were some niggling problems about Paul I’ll come back to directly) and John, well, John was in a league all of his own, somewhere near God (actually, in his own controversial words, more popular than Jesus). Witty, intelligent, idealistic, rebellious, irreverent – the combination was irresistible. Let the girls swoon over the sweet love-songs of the apple-cheeked Paul, John was the soul, the mind, the conscience of the Beatles, the one who, more than all the others, took the Fab Four out of the realm of simple pop singers and made them into something important, something significant for society at large.

Or so I saw it back in the early 70s, a few years after the break-up. Today, with more distance, more knowledge, more hindsight, I can see how much of this viewpoint was itself the product of legend, a projection of my own desires and wishes onto my hero, a simplification (at least) of a much more complex reality. But, of course, I was not alone in this simplification, it was one shared by millions of Beatles and Lennon fans worldwide.

The conventional story of the final Beatles years was pretty simple (if not always completely consistent), involving a distracted hero, a supporting actor – in turn striving desperately to save the group as well as occasionally succumbing to megalomania – and a villainess. John, of course, was the hero, Paul the supporting man and the villainess – well, that one’s easy; Yoko Ono was born for the role. If only that strange oriental had not seduced John, making him try to have her accepted as the fifth Beatle (forget for a moment that this role was already occupied by, variously, Brian Epstein and George Martin), the group would still be together, making marvellous music while the sun shone down from a diamond sky upon Penny Lane and Strawberry Fields.

The truth is somewhat different. In retrospect, I would suggest that the Beatles as a group had been slowly dying on the vine since they gave up performing live in 1966, the release of Sergeant Pepper, their masterpiece album and the death of their manager, Brain Epstein in 1967. They were all maturing and developing individually; musically and personally and the group was simply becoming too small for all of them. This is, above all, true of Lennon. Even prior to the advent of Yoko (who first turned up in 1968 during the recording of the White Album), he had, I believe, simply started to lose interest in the group, at least musically. He had entered into a period of personal development involving much confusion, including extensive use of drugs, among others LSD and heroin. He needed to find his own way, dealing with his own demons as he did so, and this way led beyond the Beatles and would have done anyway, even without Yoko.

All this leads me to a first hint about what made John Lennon artistically and musically important; there are few artists in the pop and rock area who have been able to use their talent so openly and honestly to portray their own inner struggles – Johnny Cash is an honourable exception who comes to mind – most not getting beyond lyrical descriptions of unhappy or terminated love-affairs (not that I would deny the intensity of significance of such events when we are involved with them). But songs such as Mother, which explores the fraught relationship between himself and his mother (“Mother, you had me, but I never had you …”) or Cold Turkey, which describes his withdrawal from heroin, have a quality of universality which goes beyond strict musical categories. His relationship with Yoko Ono, as much as it can get on one’s nerves, serves as an inspiration for many compositions and his song for his son Sean, Beautiful Boy, released on the Double Fantasy album a few months before his death, contains one of the greatest and wisest lines ever included in a pop-song; “Life is what happens to you while you’re busy making other plans.”

Then there’s the whole corpus of music which exists under the label, Lennon and McCartney. Every Beatle fan knows that, while all songs are credited to both of them, the ones Paul sings were written mainly by him, while John sings those songs on which he did most of the work. In the later Beatles years, when the atmosphere between the two was increasingly tense, their collaboration was, in most cases, minimal. But they still usually performed their ideas first before each other and there generally followed a phase of suggestions, corrections and amendments. Looking at the Beatles song catalogue, it is striking that the greatest popular hits, and most of the songs that could be described as having become part of the general world cultural musical heritage, like Yesterday, Hey Jude or Let It Be, are McCartney songs (in terms of their primary composition). Paul’s feeling for a catchy tune was always greater than John’s. Still, it was often Lennon’s acerbic wit which saved McCartney’s songs from maudlin sentimentality. In this context, I’m reminded that the working title for Yesterday before the lyrics were written was “Scrambled Eggs” – a real Lennonism, if ever there was one – and I can still break up in laughter at the thought of McCartney, his big, drooping eyes dripping sincerity, hunched over the piano, soulfully singing, “I said something wrong, now I long for scrambled eggs … I believe in scrambled eggs.” And if they had still been collaborating in 1977, I am convinced that a few clever Lennon amendments would have saved McCartney’s biggest selling hit, Mull of Kintyre, from its tendency to drive diabetics into sugar shock.

Still, despite all the caveats and reservations, the Lennon/McCartney catalogue has to be considered as a whole as the combined work of both composers. It is interesting that even in the phases where the relationship between both was at its most acrimonious – apart from a few niggling comments – neither of them ever seriously questioned the collaborative attestation of their music. And, following the Beatles break-up, Lennon himself produced some fine songs like Jealous Guy, Working Class Hero, Watching the Wheels and, of course, the sublime Imagine.

But, in the end, the ultimate reason why it is impossible to regard Lennon as “overrated” is his symbolic role as a public cultural avatar for the second half of the 20th Century, a role finally set in stone by his assassination on December 8, 1980. John Lennon, his music, his utterances and his life became the incarnation of so many of the themes, memes and concerns of the baby-boomer generation that he became a cultural receptacle, a popular icon. He shares this role, along with the Beatles in general, only with Elvis Presley and Bob Dylan in the musical sense, and in terms of the whole range of broader cultural themes, particularly many of those which occupied the public consciousness in the 60s and 70s – drugs, war and (especially) peace, protest, rebellion, relationships, feminism and the roles of women and men, etc. – he stands above all the others. If he had not died, ironically, it would probably have been different. Today he’d be just another filthy rich, ageing pop/rock superstar like McCartney, Phil Collins, Mick Jagger and all the others. Certainly, he would probably have added considerably to his musical portfolio and it is slightly interesting to speculate about how he would have reacted to many particular events and issues – could Bob Geldof have talked him into a Beatles reunion for Live Aid in 1985 (possible), would he have given his name for commercial sponsorship and advertising as Pink Floyd and the Stones, among others, did in the 90s (unlikely), would he have split with Yoko or had an affair with Madonna (unknowable), etc? It remains speculation, because John died, or rather was killed in the quintessential way so typical for his adopted homeland, the USA, in treating its anointed heroes, particularly those of the 60s, and so achieved sainthood in a moment, along with King and the Kennedy brothers, or Jim Morrison, Jimi Hendrix and Janis Joplin and various other rock and roll heroes.

No, Ian, neither John Lennon, nor the Beatles, are overrated. Musically he and the others remain giants, even if others, many others, could sing and play their instruments better. But above all, John Lennon cannot be overrated because he was made into a legend, a symbol for the hopes and dreams – for the very identity – of a whole generation. A symbol who achieved immutable immortality by dying young and thus taking himself beyond the inevitable relativising reality which would have come with time and age. Still, I’m thankful to you for raising the question, for forcing me to think about my own unquestioned idols – even if I choose to leave this one on his pedestal. And I take the gobshite back. J

Email ThisBlogThis!Share to TwitterShare to FacebookShare to Pinterest
Labels: rock music, the Beatles