The thunderstorms which swept through during the night had wakened me briefly, but they had left the summer morning air with a wonderful cleanly-washed feeling. The sun was shining and the pleasant fresh warmth promised to become close and muggy later but that didn’t worry me. By the time that later came, I’d be gone, flying nearly a thousand kilometres westward to Ireland. 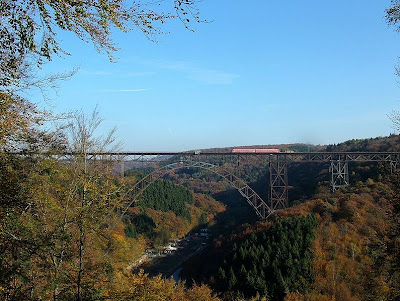 The first stage of the journey was by rail; from my home town Remscheid to Düsseldorf, with a change of train in Solingen. The highlight of this is the crossing of the Müngsten Bridge, the highest steel railway bridge in Germany. Remscheid and Solingen are both built on hills, and you can see one town from the other, but they are divided by the deep valley of the river Wupper. You look 350 feet down from the train at the river, winding its way through a densely wooded canyon. A magnificent sight on this fine morning, with wisps of water vapour lazily writhing above the water. The bridge itself has a something of a sinister reputation locally as a popular attraction for desperate people, planning to end their own lives.

I change trains in the Solingen suburb of Ohligs. Like both the other two cities in the so-called Bergisch-Metropolitan-Triangle, Wuppertal and Remscheid, it is an amalgamation of various pre-existing smaller towns. Solingen is known as the “City of Blades” and has a tradition of steel and cutlery making going back for many hundreds of years, with an historical reputation comparable only with Sheffield and Toledo. Ohligs itself is on the border between the old Duchy of Berg and the Rhineland and has, if the truth be told, more a Rheinisch than a Bergisch character. Historically, the Rhinelanders have a reputation for being relaxed, laid-back and fun-loving, while the inhabitants of Berg are more frequently described as being dour, taciturn and serious. It is, perhaps, not entirely coincidental that the Reformation made a lot of ground in Berg, while the Rhineland remained largely (if generally unfervently) Catholic.

The journey from Remscheid to Dublin is one I’ve been doing three or four times annually for the past years, ever since my parents moved to Dublin. As the train moves smoothly towards Düsseldorf, I find myself thinking about how routine it’s become for me. I was twenty one years old before I flew for the first time; now it’s just part of my life. But the world has changed in the past thirty years.

The most basic defining fact about Ireland is that it is an island. This has always made it harder to get to or leave than countries with land borders. In my youth, the most common way to and from the country was the “boat” across the Irish Sea to Liverpool or Holyhead. I’ve taken the boat too, often enough in my youth, crossing England to take yet another boat to finally reach the continent, where the way generally continued by train.

I realise that it has been quite a few years since I took a long train journey. There’s something lost there, for I find rail travel more comfortable and relaxed than flying. You have more room, you can look out the window and watch the ever-changing variety of towns and countryside, you can get up and walk around. You’re more inclined to get into conversation with your fellow travellers – or perhaps I’ve just become older and more taciturn. But that loss of relaxation is what you exchange for that most highly rated modern commodity, time. To get from Remscheid to Dublin by train and boat would take a couple of days; the way I do it now, I travel from door to door (including all the waiting at airports) in less than six hours.

Though, even in terms of relaxation, I have nothing to complain about. I do this journey so often that I have long since personally optimised every phase of it and, from the moment I arrive at the first railway station, I have moved into a personal, time out mode. I know where to get tickets, which platforms to go to, where to check in, etc., and all this stuff runs semi-automatically. So I have the inner space to just enjoy the feeling of being on the move, without pressure.

My flight is from Düsseldorf International Airport, the third biggest in Germany after Frankfurt and Munich (though it will probably be relegated to fourth after the new single Berlin airport finally gets up and running next year). Düsseldorf, with a population of just under 600,000 isn’t one of Germany’s biggest cities, but it’s one of the most successful. There are various reasons for this, one of the most important being the decision by the western allies after the Second World War to make it the capital of Germany’s largest (by population) province of North Rhine-Westphalia. 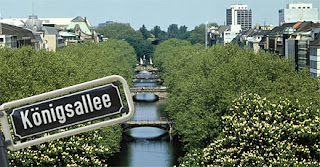 Düsseldorf has an intensively competitive relationship with Cologne, just a few miles farther up the Rhine. Cologne is bigger and over a millennium older, having been founded by Agrippa, the faithful adjutant of the Emperor Augustus, while Düsseldorf isn’t mentioned historically until the Middle Ages. Cologners tend to regard Düsseldorfers as parvenu and claim that the insecurity resulting from this is the reason why the residents of their rival city are so concerned with status, fashion, and being “in.” Certainly, the Königsallee (popularly known as the “Kö”), the premier shopping street in Düsseldorf, would claim to compete with New York’s Fifth Avenue, or the Via Condotti in Rome, and you might be forgiven for a feeling of taking the tone of the place down if you find yourself driving down the Kö in a car which isn’t a Porsche, a Mercedes, or a BMW.

Düsseldorf and Cologne both have their own varieties of beer. In Düsseldorf it’s a dark ale known as Alt, while in Cologne they brew a light, lager-type beer known as Kölsch. It’s more than your life is worth to try to order an Alt in Cologne, while the Düsseldorfers generally say that Kölsch is a liquid which passes unchanged – apart from the temperature – through the human body.

With its finely-tuned consciousness of chic, Düsseldorf is, inevitably, a major centre of culture, although here there is also a keen rivalry with Cologne. One of the city’s most successful cultural exports in the past thirty years is the cult band, Die Toten Hosen (literally “Dead Trousers,” the phrase being a slang expression meaning “nothing going on,” or “boring.”), who play a good-humoured form of punk rock, often with a healthy dollop of social criticism thrown in. 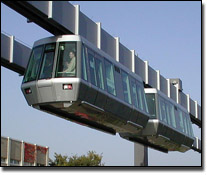 The airport is, thankfully, easily reached by rail. Thankfully, I say, because, in common with nearly all others, it costs an arm and a leg to leave your car there for anything more than an hour or two. The last stage of the journey involves a short trip on the Sky Train, a hanging monorail which takes you from the station right into the terminal building. This is large and airy, the result of a comprehensive rebuilding programme after a major fire there sixteen years ago, thus providing enough room to handle 20 million passengers a year.

Air travel, as I’ve already mentioned, has changed considerably in Europe in the past couple of decades. The key phrase is “low-cost flying.” Whereas thirty years ago flying still had a cachet of being a bit exclusive, it has now become affordable travel for the masses. Part of the philosophy behind this is the optimisation of every element of every element of the process and the reduction of the fundamental fact to its minimum, the flying from A to B. The basic flight price – on a route where the size of the planes and the frequency of flights have been carefully analysed to ensure that the vehicles are always well occupied – is kept as low as possible. Everything else costs extra; luggage, meals and drinks on the plane, choice of seats, often even personal checking-in. One of the most successful of the low-cost carriers is the Irish firm Ryanair, with its spectacular in-your-face Managing Director, Michael O’Leary (if you’re interested, you can watch him outlining the company’s philosophy here). Fortunately, I don’t have to travel with O’Leary’s firm, who are pretty ingenious at thinking up new methods to make you pay extra (they don’t fly from Düsseldorf, claiming that the landing charges there are too expensive) – as the pressure of competition with them has forced to Irish national carrier, Aer Lingus, to go low-cost too, so that I can generally get a return flight from Düsseldorf to Dublin for less than US $ 150. 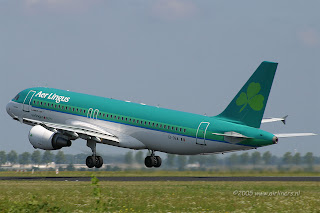 “I used to think Genitalia was an airline until I discovered Aer Lingus,” some comedian once commented. Personally, I’d prefer sex to flying any time. To be truthful, I find flying both boring and frequently annoying, uselessly annoying. It starts with the security check. Even today, years after the ridiculous measure has been introduced, there still seem to be passengers who haven’t realised that you’re not allowed to carry liquids onto the plane. It doesn’t matter which queue I choose, I always seem to finish up behind the lady who wants to bring her shampoo, face-cleaning fluid and Chanel No. 5 in her hand-luggage and engages some bored, underpaid security worker, who only speaks broken German, in an interminable and increasingly bad-tempered discussion. Forget it lady, ditch your Chanel or get another flight!

But even in the world of proposed extra charges for using the aircraft toilets, Aer Lingus still retains some of its old charm. The flight attendants are always very friendly and helpful, and they still offer a warm traditional Irish breakfast, with sausages and rashers, black and white pudding, fried tomato, potato cake, brown bread and butter with orange juice, coffee or tea. It’s not free of course – though, on reflection, it never really was, after all, it was all part of the princely price you paid for your ticket – but at € 7.50 it’s still a bargain. As I usually take the morning flight, and only drink a cup (or two) of coffee before leaving home, it has become another ritual of mine whenever I take this flight.

An hour and a half after taking off, we land. And now, another aspect of low-cost flying really comes into its own for me. All the cheap carriers make you pay extra for checked-in luggage. I have become expert at travelling light, carrying everything I really need in my hand-baggage. And so, only ten minutes after the plane as stopped, I saunter past the people standing hypnotised at the baggage carousel, waiting seemingly forever for their bags to be spewed up out of the innards of the airport, down the green customs line and out of the airport. A little more than five hours after leaving home, I’ve arrived. Now there’s just the short bus and car trip to my parents’ place.

It would have taken me just as long to drive from home to Berlin or Munich – and would have cost me just as much. Funny old world, isn’t it?

This little piece from the Toten Hosen is a love song from an extremely jealous lover, who first offers to kill himself to prove his love ... and finally decides to kill both himself and his girlfriend.