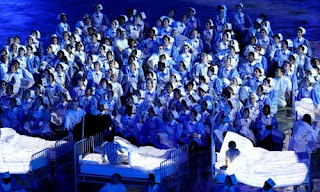 When Danny Boyle (Trainspotters, Slumdog Millionaire), the prestigious director chosen to conceptualise and stage the opening ceremony for the recent Olympic games in London sat down to decide how he was going to do it, he was soon faced with a problem. Not with the concept itself; he quickly came up with the idea of using the occasion to showcase the history of Britain. Moreover, most of the elements were clear; start with a bucolic vision of England’s “green and pleasant Land,” move on to the 18th and 19th Centuries and the Industrial Revolution – the forging of the Olympic rings against a “Satanic Mills” background was a nice touch, I thought – and the final section was easy, from the swinging sixties – Carnaby Street, the Beatles, etc. – into contemporary pop/mobile/internet culture. But what could he chose as the theme for the penultimate, connecting piece?

The basic problem lay in conventional historical British iconography and legend. Ask almost any Britain about the first sixty years of the last century and two themes will automatically come to mind; the Empire and, above all, the war – the Battle of Britain, Dunkirk, the Blitz, brave Britain standing alone against the Nazi juggernaut which had blitzkrieged its way through most of Europe. Yes… Well… Not exactly the most suitable themes for a global Olympic celebration.

Boyle came up with a marvellous concept. Taking the idea of illustrating various themes from Britain’s wonderful panoply of children’s literature (with Mike Oldfield providing the background music), he set this before the background of Britain’s National Health Service.  This portion of the show took its title from the legendary directions in J.M. Barry’s Peter Pan, “second to the right, and straight on till morning.”

The choice of the National Health Service, as the official programme put it, “the institution which more than any other unites our nation,” was inspired. And it sent a clear message to the world about what Britons regard to be the real enduring legacy for them of the epic struggle of the Second World War; the welfare state as embodied, above all, by the comprehensive right of every British resident (and visitor) to free health care. And it is an institution which, despite all the problems, all the complaints, all the shortcomings, bureaucracy, inefficiency and everything else, still enjoys overwhelming support in the British population at large. Even Margaret Thatcher, at the height of her crusade to privatise every aspect of British life except the military, never dared to try to seriously attack the National Health, much though I suspect she would have liked to.

The Olympic opening ceremony was, of course, designed as a spectacle; a playful and artistic presentation, designed to touch us on as many levels as possible, primarily the emotional ones. Were I in a mood to cavil, I would point out that most European countries have a more or less comprehensive public health system, the origins of quite a few of them older than those of Britain’s NHS. But such a criticism would indeed be small-minded, because Danny Boyle’s choice of the NHS as a fundamental icon in the British consciousness of the history of the 20th Century, particularly as a replacement image for the war, makes a much more profound point.

Beyond the concrete territorial aggression of Nazi Germany, the war fought throughout the world in the middle of the last century was a conflict between two ideological systems; to use the title of Karl Popper’s seminal work, the struggle between the Open Society and its enemies. In that respect – and Churchill was the only allied leader who really recognised this while WWII was still going on – the war itself was only half ended in 1945; it took 45 years more for the second form of totalitarianism, Stalinist centrally controlled statism, to follow its dark fascist twin.

The point I am making here is that it seemed perfectly clear to Europeans that a major part of the values which were at stake in the life-and-death struggle with totalitarian ideologies was the right of every man, woman and child to a decent life. And a prerequisite for a decent life is basic health and the treatment of illness. Society cannot guarantee happiness, but one of its most fundamental functions is to make possible for every last member – in the words of the US Declaration of Independence – “the pursuit of happiness.” Illness and disease are a major cause for suffering and, as such, make the pursuit of happiness for those afflicted much more difficult, if not, in many cases, impossible.

Seen in this way, basic health is a fundamental human right, a necessary condition for securing human dignity. This was a widespread consensus among Europeans, faced with the challenge of building up their societies after the trauma of the war, and the defeat of an ideology which despised and rejected the fundamental liberal Enlightenment consensus of what it meant to be human. And so the concept of a right of all citizens to comprehensive health care became a corner-stone of social policy in most post-war western European societies.

Even the USA, reluctantly and in a very limited form, followed this development, this maturing of realisation of the wider consequences of the recognition of the rights ensuing in a society based on the recognition of the inalienable dignity of every human person. In 1965, in the middle of what can well be called the civil rights decade, Medicare and Medicaid were introduced. But in the wake of this, an ideological change started to gain force. 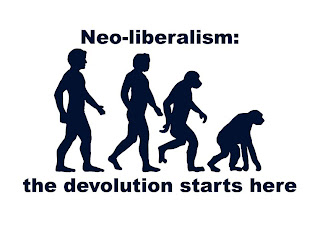 The story of the roots and development of what can be called neo-liberalism or neo-conservatism is beyond the scope of this essay. The very fact that it is vicariously named after two traditionally opposed ideological positions is an indication of the complexity of the subject. Suffice it to say that a combination of economic ideas (Hayek, Friedman, monetarism, etc.), deeper philosophical concepts (Randian Objectivism for example), the growth in size and power of corporations, moving beyond single nations to become transnational molochs, the determination of certain powerful individuals to roll back developments in societies word-wide which increasingly threatened their power and economical bases, and a dollop of fundamentalist evangelical Christianity tossed in to complicate the mix, led to an increasingly popularised basic idea that state/societal/communal acceptance of responsibility for any aspects of life was generally bad, always a curtailment of freedom and only to be accepted as a measure of last resort, to regulate areas of life which could not be regulated any other way. The eighties saw the first concrete political fruits of this new societal paradigm under Reagan in America and Thatcher (who famously stated that there was no such thing as society) in Britain.

A development of the basic concept of general health care as a basic human right became, within this context, almost impossible in the USA, as the Clintons were forced to accept in the early nineties. In Europe too, the public health systems came increasingly under attack from proponents of the political opinion that the state was the root of all evil and that, left to themselves, deregulated “markets” would provide a better world for all. As someone who has been working as a professional within the German social health system for more than twenty years now, I have experienced continually the stress induced by the ongoing war of thousands of attempted cuts and programmes to increase “efficiency.” They have nearly all been carried out at the expense of the weakest of those treated within the system and those who work in the front-line of actually delivering health care. What they have actually managed to save is debatable – the only certainty is that the profits of the most powerful involved in the system (the big pharmaceutical and insurance companies, for example) have been secured and grown.

Fortunately, in most of Europe – despite all the debates, half-truths, propaganda, and downright lies – the fundamental popular support for social health care has been too strong for the neo-libs to succeed in their goal of dismantling it. That is what Danny Boyle was celebrating in the Olympic opening ceremony; even in Britain, the European country most strongly seduced by neo-liberal chimeras, the NHS remains untouchable.

This is why Obamacare is so important. Despite all its considerable flaws, probably inevitable as something resulting from a complex process of political compromise and horse-trading, it represents an enormous step for the USA in a direction of communal moral development, one in which it had so long been behind most of the rest of the western world. And this is why its winding-up in the wake of a Republican victory at the end of this year can be seen as nothing less than a step backwards towards barbarism.

Yes, public health care is expensive. But so is any good health care, and the question remains as to how any society can look at itself in the mirror, knowing that thousands of its members are suffering and dying because they cannot pay for what they need to save their lives. 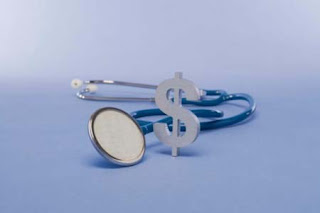 Moreover, the very question of the costs of comprehensive health-care in any society is more complex than liberal critics would have us believe. Money spent in this area is money which, to an overwhelming extent, remains in circulation in the local areas where the costs are actually produced (apart from the exorbitant sums frequently creamed off by, for example, big pharma), creating secure jobs for thousands of people at all sorts of skill and educational levels, and adding stability and economic life to many communities.

Then there is the oft cited problem of efficiency. It remains an unquestioned aphorism that the profit-driven private sector is always more capable than bureaucratic, over-regulated public enterprises. There is some truth in this. However, two points should be remembered. Quite a proportion of this bureaucratic regulation is occasioned by the need in a complex, publicly-run service to guarantee fairness and accountability. Secondly, it can be asked whether increased efficiency in a predominantly privately organised system actually profits the patients in the end, or whether the end result is not frequently the delivery of the most minimal service possible, for the highest price attainable – frequently at the cost of the weakest people working in the system, not to mention the many patients who are deprived of treatments because there is no money to be made on them, or because they weren’t able to afford an insurance package which would have covered a necessary complex treatment.

I have worked for over twenty years now within a health system which is predominantly publicly organised. There are many aspects of it which are ridiculous, frustrating, badly-organised and just stupid, something about which I tend to frequently rant, as friends and relatives will readily testify. But even in doing this, I realise that I am complaining from a position of relative luxury. In a structure as complex as modern health care, dealing with situations in which many of the people who actually need to avail of the service are in truly extreme situations, defined by pain, uncertainty and fear, there will always difficult issues, with no easy – and sometimes no good – answers.

And, given the fact that research and human ingenuity is always pushing the capability of what medicine can do, there will continually be the question of costs. But for any society which sincerely subscribes to basic values like respect and human dignity, the question must always be; “how much can we afford?” rather than, “how little can we get away with?”

When it comes to the basic question of human health, I am very glad to be living in Western Europe rather than in the USA.