Dada wouldn't buy me a Bauhaus 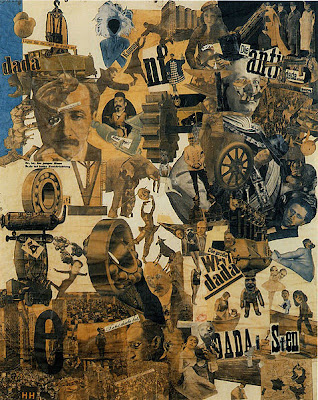 It was a post by my blogger friend Gina about the Dada movement which got me thinking about a number of different cultural/artistic movements in the first third of the last century. I have nothing like Gina’s deep understanding and expertise in the whole area of art – a comprehension which always leads me to visit her Pagan Sphinx site with a delicious combination of anticipation and admiration – so it is with some trepidation that I dare to put my toe into this particular pond. And it is because I am intensely aware of my limited understanding in this area that I will endeavour to take a more historical approach here, an attempt to consider particular “artistic” schools or movements within the broader context of general societal and cultural developments, a stage (without meaning to be presumptuous) on which I feel more comfortable.

Moreover, it is probably inevitable that I further limit this essay (in the particular consideration of two artistic movements) to a largely German, or at least Central European in a somewhat wider sense, perspective, given that I have been living in Germany for the past quarter century and feel marginally more secure on this ground than on a wider one, encompassing a wider European, or even global perspective.

After all that the 20th Century subsequently brought, it is difficult for us today to fully realise how massive the cataclysmic shock the First World War was to the consciousness of those who experienced or were affected by it. In the more than forty years since the Franco-Prussian War, which saw the humiliation of France and the formation of the German Kaiserreich, the general atmosphere had been one of continual, apparently boundless progress. Indeed, despite some discrete, largely local upheavals, such as the revolutions of 1848, many would have regarded this period of progress as going back almost a hundred years, to the post-Napoleonic settlement of 1815. At any rate, the general mood of the world was one of optimism. Things just seemed to be getting so much better all the time; from Edison’s electric light bulb to those magnificent men in their flying machines, from motor cars and modern armaments to the spread of the benefits of civilization all over the world through enlightened European Empire and the spread of US manifest destiny from sea to shining sea. And if that meant the killing of millions of savage negroes in Leopoldian Congo, or the annihilation of the cultures and lives of the Plains Indians, well, those were just the inevitable results of Darwinist survival of the fittest and the unavoidable collateral damage of the spread of superior and more powerful cultures, nations and races.

Admittedly, the situation between the five major European powers (France, Great Britain, Germany, Austria-Hungary and Russia) was continually tense. But that had been the case for over forty years now and dealing with that continual tension was what professional diplomats were for. For decades they had moderated and orchestrated the complex, dangerous game of chicken the great powers continually played with each other, dancing defiantly to the edge of confrontation and war, threatening, feinting, pulling back, brokering new compromises with new promises of future confrontations and gains. The Tangier Crisis, the Bulgarian Crisis, The Agadir Crisis, etc., etc., etc.; then all as significant as the Bay of Pigs, the Cuban Missiles or the Prague Spring were to the Cold War generations, now forgotten except to professional historians.

The world of the early 20th Century culture was already much too complex to be encapsulated by the description of any one “movement.” An additional problem arises because the general cultural flavour of the time is generally classified as Modernism, a catch-all term which tends to describe everything by defining nothing and which, as generally used, is extended to include and go beyond WWI. But – generalising and simplifying enormously – pre-war Modernism was still characterised by an optimistic view of progress, despite deeper questions of meaning and sense raised by thinkers like Schopenhauer, Nietzsche or Kierkegaard, the abandonment of conventional form by the early Cubists, or Einstein’s demolition of the classical Newtonian universe with his Special Theory of Relativity (1905). The avant-garde might be challenging progressive Realism on the cultural edges; for the mainstream such challenges were generally seen as dilettantish.

And then in Summer 1914, in the wake of the assassination of the Archduke Franz-Ferdinand in Sarajevo, the diplomats finally dropped the ball and Europe collapsed into conflagration. Although propagandist jingoism, confidently predicting victory by Christmas, was generally believed on all sides, it was the British Foreign Secretary, SirEdward Grey, whose prescience in August 1914 turned out to be truly prophetic; “The lamps are going out all over Europe. We shall not see them lit again in our time.”

In the German dominated cultural area of Central Europe, two artistic reactions to the incomprehensible carnage and destruction of the Great War emerged. At the Cabaret Voltaire in Zürich, a group of artists, many of them German exiles, were in 1916 the origin of a movement which came to be known as Dada. Dada was deliberately, almost despairingly provocative, one of the original group, Hans Richter, even describing it as “anti-art.” In retrospect it can be seen as an attempt to express the sensation of horror and loss of meaning and all moral foundation, all structure even, resulting from the experience of the war. Despite other possible etymologies, I personally prefer the explanation of the word “dada” as an expression of ultimate meaningless glossolalia. Dadadadadadadadadadada… But in German the word carries further connotations. Da in German means there. Dada is a kind of despairing showing, a pointing at the hopelessly shattered fragments of meaning, of decency, of sense; the rubble of everything governed and destroyed by the prevailing world order, acted out in the hopeless carnage of the trenches. There! And there! And there! And there! … Seen against this background, the frequent use of collage by Dada inspired artists takes on extra significance.

Dada was chaotic, unorganised, anarchic; it couldn’t be anything else. It was an outpouring of enraged creativity, not confined to art alone, but also finding expression in workshops and absurdist literature, like the writings of Kurt Schwitters (a good example is Anna Blume). As such it quickly surpassed itself; many of those who identified with it, such as Max Ernst, developing themselves further in Surrealism, which, at least partly, grew out of Dada.

The Bauhaus movement also emerged as a reaction to the experience of the Great War, but took a very different direction – a new attempt to find meaning and order, to learn from the horrors of the war, to find an integrated approach to the individual and his/her place in society so that all the suffering would not have been in vain. The emphasis on form and structure is inevitable, given that Bauhaus was initially and primarily an architectural and design movement. Though its first leader, Walter Gropius, was non-political, many of those involved were left-leaning. Bauhaus was, by its own definition, radical: “The underlying idea of the Bauhaus, which was formulated by Walter Gropius, was to create a new unity of crafts, art and technology. The intention was to offer the right environment for the realisation of the Gesamtkunstwerk (total work of art). To this end, promising artists were to be taught in a school with an interdisciplinary and international orientation.”

Gropius and his successors, Hannes Meyer and Ludwig Mies van der Rohe, were at pains to involve various artists and craftsmen in the realisation of their concept and both Paul Klee and Wassily Kandinsky taught for years at the Bauhaus School in its successive homes at Weimar, Dessau and Berlin. Piet Mondrian, not unexpectedly, also lectured there. Identifying itself with the wider Modernist movement, the Bauhaus emphasised simplicity and functionality – an architectural and design expression of the “form follows function” aphorism, while not abandoning at any point a striving for aesthetic excellence. The interaction between art and design is well exemplified by Kandinsky, who taught both basic design for beginners as well as advanced theory at the Bauhaus during a period in which he himself was intensely exploring geometrical elements and relations in his own work.

The basic philosophy of the Bauhaus was humanist, egalitarian; it envisaged a cooperative equality of skilled workers, artists, artisans and architects, a democratisation of art, a demystification of design. This had political, revolutionary aspects, and there were many committed Marxists at the Bauhaus. But even without them, the whole direction of the movement was deeply suspicious to other, darker forces.

On January 30 1933, Adolf Hitler became Chancellor of Germany. The Bauhaus was soon wound up, and in the following years most of its talent left the country. As did many of those who had been involved in Dada. For, although their reactions to the brutal lunacy of the First World War were in many respects antithetical, the attitude of the New Vandals who had taken control of Germany to them was essentially the same. According to the Nazis, both schools propagated entartete Kunst [degenerate art] and as such were subjected to bannings, persecution of those artists who had not left the Reich, and the destruction of some of their works.

Nonetheless, their legacies survived. The anarchic freedom, the celebration of apparent meaninglessness expressed by Dada bubbles up repeatedly ever since, exerting its spell on figures and movements as diverse as Josef Beuys, Ken Kesey and the Merry Pranksters, Malcolm McClaren and punk. The Bauhaus left a lasting influence on modern architecture ever since, as well as all sorts of areas of design. Just think about Scandinavian furniture – even that IKEA bookshelf you’ve got in your study. And, looking at the works of Andy Warhol, I like to think one can see the inspiration of both movements.

Note on the Title: Much as I would like to claim it as original, honesty forces me to admit that I first heard the phrase over twenty five years ago from my old friend, the philosopher Paul O’Grady, of Trinity College, Dublin.