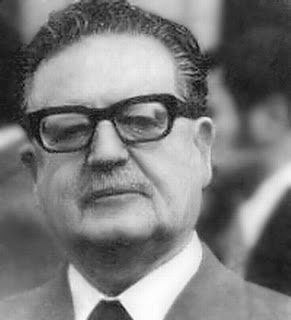 As the ninth anniversary of the World Trade Center attack rolls around, accompanied by an infamous Koran-burning project, I was reminded recently that the fall of the Twin Towers is not the only horrible event which took place on September 11th.

At the beginning of September 1973, Salvador Allende had been president of Chile for nearly three years. A doctor by training, he was a cofounder of the Socialist Party of Chile in 1933, the same year he qualified as a doctor at the age of twenty-five and had spent his whole life as a left-wing politician, including periods as health minister and president of the Chilean senate. He was democratically elected president in 1970 and started to carry through a radical programme of nationalisation of industry and natural resources (particularly copper mines) and continued the process of the transfer of land from large landowners to the peasants begun by his Christian Democrat predecessor.

Allende was loved and supported by the little people of Chile, the poor, the peasants and the workers. He was opposed – obviously – by the rich, the powerful, the Catholic Church and, of course, the USA. Nixon and Kissinger, caught up as they were in Cold War block categories, regarded him simply as a communist and were convinced that he could not be allowed to remain in power. Following Allende’s election, Nixon ordered the CIA to depose him (the operation was called Project FUBELT). "Make the economy scream [in Chile to] prevent Allende from coming to power or to unseat him." (Documented order from Nixon to CIA boss, Richard Helms, September, 1970.) With CIA backing, the head of the Chilean military, General Schneider, who was against military intervention in politics, was assassinated. The provocation – designed to open the way for generals in favour of a coup d’état – backfired because the public and political reaction in Chile to the murder was an increase in support for Allende and a strengthening determination not to let constitutional politics and the rule of law be threatened.

The opposition of the Nixon administration to Allende remained steadfast, and there were various attempts to destabilise Chile, including a long-running truckers strike in 1972. The description of the strike as that being of truck-drivers is somewhat misleading, as it wasn’t so much the drivers (few of whom owned their trucks) who striked as the truck-owners. Henry Kissinger presented the US position clearly with the comment; "I don't see why we need to stand by and watch a country go communist due to the irresponsibility of its own people. The issues are much too important for the Chilean voters to be left to decide for themselves."

So, was Allende a communist? He was certainly strongly influenced by Marxism and was generally described as a Marxist. He admired Mao’s China and Ho Chi Min and was friendly with Fidel Castro. Politically he came to power as leader of a broad Popular Front movement, including communists, socialists and social democrats. When in power he vigorously pursued classic socialist/communist themes, such as nationalisation of the means of production and the precedence of the working class. But Allende had also been deeply influenced in his political formation by anarcho-syndicalist ideas and he was always a convinced democrat. He rejected the fundamentalist Leninist theses of the dictatorship of the proletariat, the primacy of the communist party and the need for the leadership of the socialist revolution to establish secure control over all the machinery of the state, particularly the military. Although the Soviets supported Allende, that support was less than whole-hearted, probably because of his unwillingness to use force against his opponents.

Something which, seen in terms of realpolitik, finally led to his downfall. The tension in Chile, fuelled massively by destabilising measures originating in the US, continued to grow. The “golpe” (coup) was increasingly seen by observers both within Chile and abroad during the summer of 1973 as ever more likely. A first putsch attempt in June failed. On September 11, 1973, the armed forces, under the leadership of General Augusto Pinochet, moved to take power in the country and depose Allende’s democratically elected government.

The president and his supporters took refuge in the presidential palace, La Moneda, which was attacked by armour and infantry and bombed by the air-force. With the palace in flames, Allende made a last emotional farewell speech by radio, telling the nation of the coup and his refusal to resign his elected office under threat, and his supporters surrendered. Allende himself (most sources today agree) committed suicide as the military stormed the building.

It appears that Pinochet’s coup was not directly instigated by the CIA, although they knew that it was coming. They didn’t have to – the numerous acts of destabilisation in the previous three years had come to their logical fruition. Forty eight years of democratic constitutionalism (a proud record for Latin America) ended. Pinochet’s junta ruled for 17 years. In the aftermath of the coup, around forty thousand people were impounded in the National Stadium and thousands were killed or disappeared. Many more were tortured.

Today, Chile is a democracy again, but many Chilean commentators observe that the country has yet to really deal with what happened under the junta – there are parallels here to Spain and the massive skeleton Franco left in the Hispanic closet. A marvellous exception is the great novel by Allende’s cousin, Isabel, The House of the Spirits.

So, this Saturday the press will be full of calls to remember the Twin Towers, and rightly so. But we can also think of September 11, 1973 and the bloody death of a dream of decency and dignity and all the horrors which followed.

“I have faith in Chile and its destiny. Other men will overcome this gray and bitter moment when treason seeks to prevail. Keep in mind that, sooner rather than later, the great avenues will open again and free men will walk through them to construct a better society. Long live Chile! Long live the people! Long live the workers!”