And now for something completely different ... 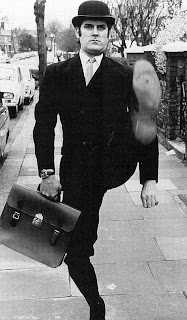 When life is hard and the going gets tough, there's one recipe which I can guarantee will make almost anyone feel better and even get you chuckling – anything by the Monty Pythons. This was something the British geniuses of comedy were themselves well aware of and, in fact, lampooned in the legendary end of The Life of Brian where a large number of people being crucified happily sing Always look on the Bright Side of Life, pointed by Eric Idle's legendary comment, “Cheer up Brian, worse things happen at sea ...”
The Monty Pythons, Graham Chapman, John Cleese, Terry Jones, Terry Gilliam, Eric Idle and Michael Palin, first appeared as a group with Monty Python's Flying Circus on the BBC in 1969 and their final major common project was their third film, The Meaning of Life, released in 1983. During this time they produced a body of work which must rank as the highest quality comedy produced during the 20th Century and setting a standard for all who have come after them, a standard which may often have been momentarily reached, but never with the consistent surety of touch achieved by the British troupe.
The British have always had a particular sense for comedy, especially a particular kind of clever, anarchistic, surreal, intelligent mayhem, which no other nation has quite managed to reach; one of the first major proponents being a certain Mr. Shakespeare from Stratford-on-Avon. The Pythons understood themselves as being part of a longer tradition, taking inspiration from the Goons (a group which contained Peter Sellers and Harry Seacombe), and particularly their artistic motor, the Irish comedy genius, Spike Milligan – John Cleese once said that “Milligan is the Great God to all of us.” During their time with the Pythons, and subsequently, all the members (with the exception of Chapman, who died in 1989) have had successful individual careers, variously in comedy, acting and film direction and production – Cleese's TV series Fawlty Towers is one of my personal favourites and a true comedy gem.
Good comedy always pushes at the boundaries and the Pythons were certainly no exception. The Life of Brian, a hilarious lampooning of all sorts of issues, using the New Testament as its template, was banned in my own country, Ireland, as blasphemous for many years; although this sobriquet was always rejected by the Pythons, who made it very clear that it was the story of the guy “born in the stable next door,” and the two brief appearances by Jesus in the film (at his birth and with the Sermon on the Mount) make this quite clear. In my own biography, my enthusiasm for the film led an older Dominican confrère to initiate an attempt to have me expelled from the Order during my student days in the early 80s – an attempt quashed by my wiser and more understanding religious superiors. Their irreverence led to some problems getting funding for some of their film projects, problems thankfully overcome with the help of rich rock musicians; Pink Floyd, Jethro Tull and Led Zeppelin backing The Holy Grail and George Harrison putting up the production money for The Life of Brian.
But there was something completely authentic and honest about the Python's irreverence, something inevitable and absolutely necessary. Nowhere does this become clearer than after the death of Graham Chapman – perhaps the saddest of the Pythons, a man tortured by alcoholism and the strain of coming to terms and going public with his homosexuality, something much more difficult thirty years ago than it is in our more tolerant times, at least in this respect (Freddy Mercury is another example of this). The following account is taken from Wikipedia:
The five surviving Python members decided to stay away from his private funeral, to prevent it becoming a media circus and to give Chapman’s family some privacy. They sent a wreath in the shape of the famous Python foot with the message “To Graham from the other Pythons. Stop us if we’re getting too silly”. They held a private memorial service in St Bartholomew's Hospital in London on the evening of 6 December 1989, with a chorus of the Chinese version of the hymn "Jerusalem" ("… Bling me my speal, oh crowds unford, bling me my chaliot of file…"). Cleese delivered his eulogy, which began as follows:

Cleese continued after a break from laughter in the audience, claiming Chapman had whispered in his ear the night before, when he was writing the speech, saying:
Palin also spoke, saying that he liked to think that Chapman was there with them all that day — "or rather, he will be in about 25 minutes," a reference to Chapman's habitual lateness when they were all working together. Idle, choking back tears, stated of Chapman that he had thought that Palin talked too much and had died rather than listen to him any more. He also led other surviving Python members along with Chapman's family and close friends in a rendition of "Always Look on the Bright Side of Life" from the film Monty Python's Life of Brian. Not to be outdone by Cleese, Idle was heard saying during the song's close: "I'd just like to be the last person at this meeting to say 'fuck'. Thank you very much, God bless you, Graham."

YouTube has loads of Python sketches and excerpts. After much deliberation, I've chosen one of the early classics – the “Dead Parrot” sketch John Cleese referred to in his eulogy for Graham Chapman.