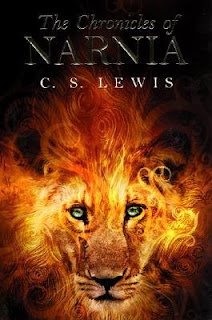 A few evenings ago, I had the apartment to myself and needed something new to read. This, in itself, is not so unusual; those who know me better know that I am incurably, deeply addicted to reading and that I always have a book going, frequently more than one, and it is completely unthinkable for me not to have something to read. is as necessary for me as breathing and eating and has been since, at the age of five, I discovered the myriads of worlds contained inside book-covers.

A fortunate aspect of my particular form of this infinitely pleasant addiction is that I am well capable of rereading many books; in fact, one of my basic criteria for judging a book is the question as to whether I could imagine reading it again. So I perused my bookshelves and stopped at a large, handsome hardback volume, a special offer at Amazon for a pittance I happened to stumble across around a year ago, The Chronicles of Narnia by C.S. Lewis. Now that’s an idea, I thought, just the right evening for it. I made a choice of CDs (Händel’s Wassermusik being the first of the selection), a pot of roibusch tea, settled down into my armchair and returned happily to a world I first discovered over forty years ago.

When I was nine years old, we moved from the to Wicklow town. I found the move very hard. Tinahely is a small village, beautifully situated in the , and I had felt completely at home there. It was small enough for us as children to know practically everyone (or so we thought anyway) and, as a boy I had, with friends, explored large areas of the hilly countryside round about (http://www.tinahely.ie/index.php?id=1). The move to the larger town of left me feeling desperately homesick for many months, even if there were compensations, like a large public library. One cold and wet evening that winter, my father returned from a business trip to Dublin bringing three books by C.S. Lewis with him, The Magician’s Nephew, The Horse and His Boy and The Silver Chair. And so, for the first time I entered the world of Narnia.

I think I would have loved the books anyway; my acquaintance with fantasy went right back to the first book I remember reading, Lewis Carroll’s , and I had already been enchanted by The Wind in the Willows. But I think my unhappiness at that time increased my wonder at the world Lewis had created – it was escapism, pure and simple, but such escapism need not always be bad, particularly for a child. And what an escape! Children having wonderful adventures with marvellous, fantastic creatures in a magical world, written in a beautiful language with a narrative surety which pulls you along effortlessly through the stories. Lewis once said somewhere that he wrote the stories he himself as a child would have liked to read and he knew how to put things into stories which are important for children, like describing good things to eat, and, more generally, taking the time to tell of nice and happy things which happen, as well as portraying the tension, fear, uncertainty and discomfort which are the motors which move an adventure along. He also had the talent of addressing his readers directly with little asides, as an oral storyteller will do, moving briefly with a sentence outside the story (reminding you, often at some of the most frightening parts, that it is just a story), something which generally appeals to younger readers. At any rate it appealed to me.

Lewis wrote the seven Narnia books between 1949 and 1955 (they were published annually from 1950 to 1956). Although their publishing order is somewhat different, they follow a clear chronology, portraying the world of Narnia from its creation in The Magician’s Nephew to its end in The Last Battle (although the first published and perhaps most famous is The Lion, the Witch and the Wardrobe). My father, I think, knew nothing of this when he brought those three books home to us in the winter of 1969-70, and the fact that I read them out of sequence didn’t particularly worry me at the time. Interestingly, in his choice of three out of seven he managed to select the only books in which none of the Pevensie children play a role. Be that as it may, having read those three, I was determined to read the others as quickly as possible and, in the next year or two I managed to get my hands on all of them (if, in some cases, only temporarily from the local library).

What happened to those original books I do not know. I have four younger brothers and sisters and our family moved house a couple of times after that, none of which facts are particularly conducive to the survival of individual paperback books. During my time as a novice in the Dominican Order, I rediscovered all seven of them in the novel library of the noviciate house in . I reread them, of course, along with many other of the books there – that novel library played a not insignificant role in my surviving that pretty strict, austere year (and I was instinctively careful not to mention to my novice master just how frequently I used it to enliven what were frequently pretty monotonous afternoons and evenings we were supposed to spend “studying,” just one aspect of a fairly completely regulated daily timetable).

The Chronicles of Narnia, as they are generally known, have been read and loved by millions of children (and adults) since they were published over half a century ago. They have also been the subject of some (frequently fierce) criticism. Lewis’ friend, fellow academic and fellow Inkling (a member of their informal literary club in ), J.R.R. Tolkien disliked what he saw as Lewis’ too pervasive use of allegory in the stories, even though Tolkien himself was a convinced Catholic and more than a little instrumental in Lewis’ conversion to Christianity. And, indeed, the allusions to Christianity, particularly in The Lion, the Witch and the Wardrobe and The Last Battle, are laid on pretty thick; the former being – in its basic plot line – a retelling of the basic Christian theme of betrayal, execution and resurrection, with Aslan as a hardly-disguised god-man (or god-lion) Christ figure. The contemporary children’s fantasy author and hard-line atheist, Philip Pullman, has been particularly harsh, describing the Narnia cycle as “one of the most ugly and poisonous things I've ever read” (http://www.crlamppost.org/darkside.htm). , of course, as a member of the Richard Dawkin’s school of muscular atheism, finds Lewis’ Christian apologetics deeply repugnant and resents that innocent children, reading the Narnia stories for fun, are thus willy-nilly subjected to Christian propaganda. He goes on to lambast Lewis’ “supernaturalism … reactionary sneering … misogyny … racism … and sheer dishonesty of his narrative method.”

Although my world-view is much closer to that of than of Lewis (my own faith-journey having taken the opposite direction to that of Lewis), I think he goes much too far here. Yes, Lewis is pushing Christianity, but I don’t think that really influences his young readers all that much. Children aren't bad at filtering out superfluous stuff and in Lewis' books the story is the important thing, because it's being told so well. And yes, he is (for all that he was Irish born) an English gentleman academic, born at the end of the 19th Century, with all the residual misogyny, snobbery and racism such a background brings with it. Much the same can be said for Tolkien (although Tolkien had no interest in expounding Christian theology in Lord of the Rings and didn’t). In the end, it doesn’t really matter, because the Narnia books are rattling good stories, exquisitely written. And, if I dare say it, much better than ’s Dark Material trilogy, fine though this undoubtedly is. writes good fantasy, Lewis wrote classics.

One thing does unite and Lewis and contrasts them with Tolkien – the film versions of their works (The Lion, the Witch and the Wardrobe, Prince Caspian and ’s The Golden Compass) are weak. It took the genius of Peter Jackson to tackle the most complicated and difficult project and produce a worthy cinematographic version of The Lord of the Rings (even if not as good as the literary original, but then, films never are really, are they?).

So, I’ve got to go now. You see, I have an appointment in Narnia (more correctly in Calormen, that threatening empire across the to the south) with the Horse and his Boy …Narnia and the North!

Sixpence None the Richer are were a professed Christian group, who gave C.S. Lewis as one of their major influences. "Kiss me" was their biggest hit.