“Well, I’m back.”
Sam Gamgee, The Return of the King
… And I’m not sure I want to be. Yesterday evening I returned after spending a week in – an isolated hotel on the Aegean coast, about 40 km south of . A week of complete relaxation with the biggest decisions being what to eat, or at which swimming pool to spend the afternoon. 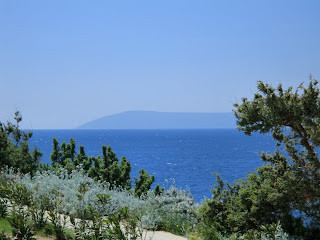 I did take my netbook with me, with the vague intention of perhaps writing something, or logging onto the internet occasionally, just to check my mails, you understand. In the event, I did neither and the netbook was only briefly powered up a couple of times to transfer photos from my camera to the hard drive.
Checking my mail inbox yesterday evening – horrifically full after a week of being left to its own devices – I realised that it has been literally years since I have been removed from cyberspace for so long. What this says about my life, or modern life in general, I’m not sure; when I get my thoughts together about it, it may even prove a subject for a post here sometime in the near future. There are, for example, many mails which I should answer, particularly various comments on posts on this blog, which have been waiting patiently in my inbox for approval. As I write this, I am becoming uncomfortably aware that I am generally not as diligent about replying to comments as I should be – let this then function as a general apology to all those who take the time to comment on my offerings here; I do appreciate what you write and I am aware that the dialogues which comments give rise to are one of the most important aspects of blogging. It’s just that there are so many normal everyday tasks to do in the hectic hurly-burly of life that I don’t always get around to them all.
Which is one of the things which was so marvellous about the past week; getting so completely out of the everyday routine, using the opportunity afforded by a week’s holiday – a package “all-inclusive” deal which even relieves one of all burdens of decisions regarding holiday budgets because everything in the hotel is included in the price, including drinks from the various bars. Very quickly after arriving, I found myself switching into a profound relax, almost standby, mode, so that, even of the four books I (an inveterate, compulsive reader) had brought with me, I only managed to read one during the week. Although, on reflection, it wasn’t standby at all; rather it was a truly blessed opportunity to live intensively other levels of life, to lie in the warm Mediterranean sun, eyes closed, letting one’s thoughts idly meander by until one realises that one has, in fact, not been thinking at all, or to share the flow of life as experienced by my four-year-old grandson who, along with his mother, had accompanied me.
Bertrand Russell once wrote a marvellously intelligent essay titled In Praise of Idleness, which should be required reading for all thinking people. At the end of my holidays, I feel a sense of regret that his arguments have not gained more currency in our modern world and, at the same time, a small degree of satisfaction that, for a week at least, I have managed to experience some of the advantages of the mentality he suggests. But “normal” life is regaining its hold on me and so I find myself once more slowly knuckling under the various demands of routine – including my (entirely voluntary) self-chosen obligation to look after this blog. And, as I so succumbed to idleness in the past two weeks as to neglect to let my readers know how pleasant my holidays were, I will now provide some written snapshots of some of my experiences – virtual postcards, if you will, from Holidayland.
Snapshot 1: The Flying Pig
We were travelling very early in the season – the hotel was open for less than a week when we got there – so instead of flying on a charter flight full of sun-hungry Germans, the travel company had booked us on a regular flight from Düsseldorf to with the Turkish low-cost carrier, Pegasus Airlines. As a result, most of the passengers were Turkish, people travelling for all sorts of reasons between two international cities.
The low-cost air transport concept has revolutionised air travel in in the past twenty years, making flying from one country to another something affordable for ordinary people rather than an expensive luxury. In my own case it has made visiting my Irish homeland something I can do for a few days a couple of times annually rather than a major expedition to be planned every second year or so. Though the major carriers like Ryanair or Easyjet are better known, Pegasus is the largest private Turkish airline with around 100 flights daily. 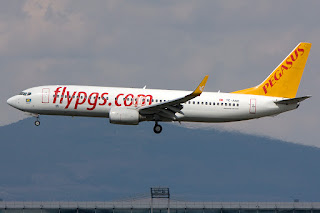