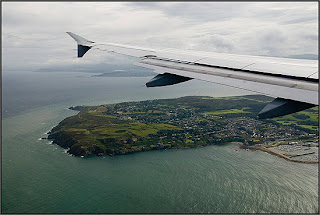 The Airbus 320 corrected course for its final approach on a beautifully clear morning, dipping first to the left then to the right, I could see the whole sweep of the eastern Irish coast, from Wicklow head to the south to the peaks of the Mountains of Mourne in the north. In the middle was the great spread of Dublin Bay, bracketed by Dun Laoghaire and the Hill of Howth, the approaches to the port sticking out like the tines of a tuning-fork in the middle, dominated by the twin chimneys of the Pigeon House power station.

As the plane shed altitude over Howth Head, two things struck me, as they always do when I fly into Dublin; firstly, how green everything is and secondly, how much Dublin sprawls. The green is just the actual confirmation of the original Irish cliché, a result of the island’s mild, moist climate; the sprawl is due to the deep Irish preference for everyone owning their own house, so that rather than the continental European preference for large accommodation units, Irish towns and cities basically consist of housing estates with mostly semi-detached houses, none more than two storeys high. But the generous area north of the Dublin/Wicklow Mountains leaves space enough for a Greater Dublin population of more than 1.5 million, about a third of all residents of the Republic.

I personally think that the approach to airport is the most beautiful I know, but this I suspect has much to do with my deep love for the city. I only lived there for six years, from the age of eighteen to twenty four, but even now, more than a quarter of a century after I left, I still regard it more as home than anywhere else I have lived and it’s always something special to come back there.

The city and the whole life there have changed enormously, of course. Most of my friends in remember the early eighties as a time of terrible gloom and hopelessness. There’s a lot of truth in this – the country was in recession, there was little money around and ’s biggest export was (as it had often been before) its young people – leaving a country with nothing to offer them to make their fortunes around the world. Conservative, church-inspired views still dominated social issues; to buy a condom you had to go to a pharmacist and prove you were married, right-wing Catholic groups bullied the country into accepting a constitutional amendment prohibiting abortion and a first attempt to legalise divorce failed. But this was only half the story.

Even within the Church – an area in which I was particularly involved at the time – there were strong anti-establishment currents, the most obvious being an increasing interest in liberation theology and social justice issues, at home and worldwide, which reached a provisional peak in the active involvement of many church groups in the massive protests surrounding Ronald Reagan’s visit to Dublin in 1984. There was a vibrant local music scene in Dublin, from a young U2 to the great trad-rock group, Moving Hearts, and Ireland was becoming an increasingly popular part of the international rock touring circuit; as well as local greats like Rory Gallagher and Thin Lizzy during those years, I saw Simon and Garfunkel and the Stones in 1982, and, during that period, Clapton and Dave Gilmour and others as well. There was a feeling that, despite the doom and gloom, there was incredible vibrancy humming under the surface, pushing to break out.

Most of it was probably that I was young, for when we are young we spend our energy with wild and passionate profligacy, secure, despite all the uncertainty and anguish of our newly discovered potency, that we are invulnerable. First love, first sex, first high, first everything, passion and longing and idealism savouring everything with an intensity that keeps you awake till dawn, drunk on joy and friendships and ideas and possibilities, dancing in the moonlight. And for me, mixed up inextricably in all this, Dublin, dear dirty Dublin, Strumpet City, a Viking-Irish-English melange of a town over a thousand years old which has seen everything; love and hatred, betrayal and heroism, sanctity and corruption, poverty and prosperity, birth and suffering and murder and ecstasy and death in every generation and survived them all.

But that joy and passion of youth is not unalloyed – it is mixed with uncertainty and insecurity and can be easily hurt and disappointed. In the middle of the eighties, in a first flowering of disillusionment, I left and a few years later that vibrancy which I had always sensed broke out in a flowering of creativity and optimism, shared by the whole country. The nineties were the early Tiger years when there was still something real behind the hype; the Mary Robinson presidency, the liberation from the heavy deadening hand of religious and nationalist tradition, imagination and enterprise bringing sweeping, heady growth, change and prosperity, Ireland finally taking a confident place among the nations of the earth. I remember coming back to visit during that period and being surprised and delighted at what was happening. Finally, I thought, at last …!

And then the century turned, the millennium came and went and optimism mutated to hubris, creativity became greed as the baby of public morality and essential groundedness and common sense was thrown out with the bathwater of dead tradition. A dangerous bubble was growing, being blown up by expectations, speculation and an atmosphere of invincibility. In the old dockland area of , glass temples of international finance were being raised and virtual money was being spun around the city, the country and the globe at increasingly dizzying speeds, accreting zeroes as it went. was a great place to visit during those years, there was an incredible buzz to the place and the town seemed thronged with happy hedonistic revellers, partying constantly under the cranes of the ubiquitous building developments. Like some other visitors, I wondered occasionally aloud about who was paying for it all and how, but everyone assumed that it was all the result of Irish talent and work. It was a tiger economy, like the Asian ones; but the Asians were building computers and making cars for export while the Irish were building houses for themselves and making money by borrowing it.

The result is well known and the pain is now only starting. I was out in last Wednesday night and took a bicycle tour of the new developments on the dockland area. Some are unfinished and probably never will be now, more are completed but empty. The restaurant (in the new Grand Canal Dock area) and the pub (the well-known traditional Mulligan’s in ) we visited were both three quarters empty, something unthinkable three years ago.

But then a few days later, walking back to where my parents live on Saturday, shortly before midnight, there were many young people on the street, laughing and joking with each other, having fun. Alcohol was certainly fuelling some of it, but then it always did, didn’t it? Passing them, exchanging a short greeting, it struck me that nothing important had really changed much. For all that has happened since then, prosperity won and possibly lost, global networked connectivity and smartphones and twitter and family holidays in Florida (now perhaps a thing of the past), they could still be me, thirty years ago. You are only young once and you take your youth when and where you get it.

I got mine in . I loved it and, if I’m honest about it, that’s a large part of why I love too. I suspect I always will. Perhaps all the more so precisely because I don’t live there any more.