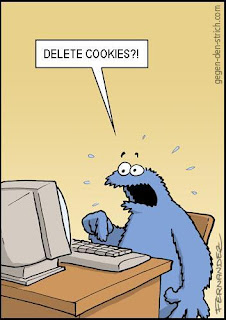 Time to feed the blog again.
And, as I realised before sitting down to this, for the fiftieth time. A half century. If I were a cricket player, like my friend Neil (who I hope is reading this) used to be in his younger days, this would be quite a respectable total. Neil tells great stories of long ago cricket games (and rugby league games as well), of the ineffable joy of snatching victory from the jaws of defeat against all odds and can, when he waxes lyrical, even enthral an Irishman like me, whose general prejudiced view of cricket involves daft, upper-class Englishmen spending most of several days standing around on a perfectly manicured grass field using funny terms like LBW and googly (which, incidentally, has nothing to do with an internet moloch).

My friend Neil is someone I have never seen. This is something he has in common with Chris and Molly and Gabby and Ashok and Ed and quite a few others. For they are all friends I have made on-line in the past couple of years. And I use the word “friend” here quite deliberately. It is a word which has suffered under a peculiar kind of inflation on-line, particularly since the burgeoning popularity of Facebook and other social networking sites in the past few years. One of my “friends” on Facebook (and he is someone I do actually know) has nearly 4,000 friends there. Nobody has 4,000 friends, at least not in the sense in which I understand friendships; people you know, acquaintances, certainly, but not friends. To be fair, I will immediately add that the person I am referring to is self-employed in the entertainment industry, so that social networking and business networking are one and the same for him and he needs to hustle to make a decent living, therefore I can understand why he uses Facebook the way he does. But me, I couldn't even begin to keep track of my news feed with that kind of volume and friendships for me involve a basic mutuality, an interest in what my friends are saying and doing as well as me telling them what I'm up to.

And there is a little more to it as well. While I know that, practically seen, there are many of my virtual friends whom I will never meet in the “real” world, the hope that I will be able to develop at least some of these relationships face-to-face is very real. Last year on holidays in the Netherlands I was able to spend some time with Allan, who up till then I had only known on-line, and I certainly hope to meet with him again. And Ashok, among other things, organises excursions into the foothills of the Himalayas and, if everything works out well, I have plans to be part of one of those next year. Largely due to the efforts of my mother, Clare, I've made contact with branches of her family, the founders of which left Ireland for the USA over seventy years ago and there's a wonderful deepening of relationships going on in that area at the moment. The boundaries between “virtuality” and “reality” are permeable – and that's the way it should be.

For me it has worked in the other direction as well. Through the internet I have been able to re-establish and maintain old friendships, some of them going back to my childhood. And when I visit Ireland for a couple of days in a few weeks time, I'll be meeting some of them too.

Like most major revolutions in life, most of us have become so accustomed to (and dependent on) the internet so quickly that we now take it for granted. Yet for nearly everyone, all this has happened in the last 20 years. A few figures and dates make this clear. The term World Web was invented by Tim Berners-Lee in 1989 (the year the Berlin Wall fell) and the Web made its public debut in 1991. At the end of 1995 there were 10 million world internet hosts, today there are over 700 million. Also in 1995 (the year O.J. Simpson was found not guilty of double murder) Microsoft released its Internet Explorer 1 and Yahoo!, Amazon.com and Ebay went on-line. In 1998 the Google search engine hit the web (Bill Clinton denied he had “sexual relations” with Monica Lewinsky) and Wikipedia appeared in 2001, the year the twin towers fell. Facebook and World of Warcraft were launched in 2004, the same year the Indian Ocean Earthquake and Tsunami killed around a quarter of a million people. YouTube has only existed for five years.

Maybe it's just that I'm getting older, but all of this seems to have happened only yesterday. In common with Google, I've been on-line for twelve years and during this time the internet has become an important part of my life, for all sorts of things from banking to shopping to finding and booking flights (and, in the past year or two, checking in as well). In retrospect, getting broadband a couple of years ago really boosted my use of the web – and can you remember what it was like with a dial-up modem, waiting for ages for that loading-bar in the corner to finally turn completely blue?

Of course, like any other major technological advance in human history, the internet has had its victims too; large areas of the retail industry, or travel agents, for example. The newspaper business is in trouble in many areas and is having to painfully reinvent itself to avoid going the way saddlers did after the invention of the motor-car. And spare a thought for those people who used to sell encyclopedias door-to-door, they seem to have disappeared as completely as the dinosaurs.

And that's no wonder, because one of the most significant effects of the internet has been the availability of simple information. The verb “to google” has entered many languages in the past few years and, for most of us, unlimited information is only a couple of mouse-clicks away. Of course, information is not knowledge let alone wisdom and the whole issue of the truth of that information is another big question. With the plethora of information instantly available, we have needed and continue to need to develop new skills to filter and find what we are looking for. And to try to be aware of when and how we are being manipulated. Everything we do on-line leaves a trace and we leave all sorts of information about ourselves “out there” which others can use for all sorts of things. Shopping and consumer profiles, for example. Or future employers. Or criminals. Or governments.

I live in Germany and Germans are very touchy about personal privacy and data protection. Google Street View, for example, is having huge problems being launched here, because many people are insisting on their right not to have pictures of their homes available on the web and Google has been legally obliged to pixelate the faces of any individuals photographed to make them unrecognisable. While I don't share the extreme views of many of my German friends (some of which I frankly regard as paranoid), I am very glad that this critical position is well and eloquently represented as a counterweight to those who seem to have no compunctions in this area at all.

But, in the end, the most important thing about the internet for me is the amazing avenues it opens for communication, for “talking” to each other. Of which blogging is just one. The fulfilment of a desire to let others know what one thinks about things, to reach out, to make contact. Mixed, of course, with many other motivations (for nothing that we do is simple); the need to create something, something good perhaps, the need for the approval of others, maybe a desire to influence the thoughts and opinions of others and thus to have some tiny, minuscule effect on the way the human world turns. I plead guilty – on all counts. But, in my own case, there are also a few other reasons. Curiosity about myself, about my own capacity to take a particular form (the essay) and see what I could do with it. A need to test my own ability to keep my self-chosen project going, to see where my instincts for creativity would bring me and whether I would be able to reach others, to get them to join me, for a little way, on my own journey. About a month after I started it, I installed a counter here and since then this blog has had nearly 8,000 visits. Eight months, fifty posts and an estimated 70,000 words (and that's a good half of a decent-sized book) later, I'm content enough with the result to keep going.

So, my friends, new and old, tarry a while with me on my journey. Let us wander together the ways between real and virtual, and virtual and real. There are themes and subjects enough. Let us share ideas, and thoughts, and feelings, carried in bits and bytes, bringing us together in the most real of all worlds – the world of human interpersonal encounter.

Once out of nature I shall never take
My bodily form from any natural thing,
But such a form as Grecian goldsmiths make
Of hammered gold and gold enamelling
To keep a drowsy Emperor awake;
Or set upon a golden bough to sing
To lords and ladies of Byzantium
Of what is past, or passing, or to come.

W. B. Yeats, Sailing to Byzantium