The Luxury of Natural Beauty 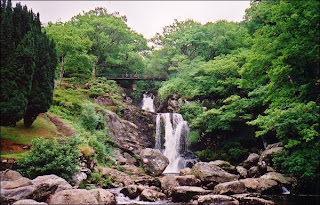 This darksome burn, horseback brown,
His rollrock highroad roaring down,
In coop and in comb the fleece of his foam
Flutes and low to the lake falls home.
A windpuff-bonnet of fawn-froth
Turns and twindles over the broth
Of a pool so pitchblack, fell-frowning,
It rounds and rounds Despair to drowning.
Degged with dew, dappled with dew,
Are the groins of the braes that the brook treads through,
Wiry heathpacks, flitches of fern,
And the beadbonny ash that sits over the burn.
What would the world be, once bereft
Of wet and wildness? Let them be left,
O let them be left, wildness and wet;
Long live the weeds and the wilderness yet.

Inversnaid by Gerald Manley Hopkins is probably known to every Irishman or woman who has attended secondary school for the past forty years, for about this long, the poem seems to have been part of the syllabus for the Junior Certificate in English. I was reminded of it today when came up in an internet discussion group I’m part of and it was with great pleasure that I found it online and read it again.

While reading it, the scenes in Stephen Frear’s The Queen, where Her Majesty, brilliantly played by Helen Mirren, drives off in her Land Rover from in a search for peace of mind in the Scottish highlands, came into my mind. Nearly a hundred years after wrote the poem, there’s still plenty of wildness and wet left – and not just for the royal family either. Even in the Rhine-Ruhr area where I live most of the territory is green – forest, lakes, rivers, parks and fields – and this is a region with a population of around 10 million in an area about the size of in , or the State of in the . So have we got it right?

Looking at large areas of the so-called developed world one would be inclined to answer yes. We have learned from the past, have imposed higher standards for environmental safety and tolerance. Salmon are swimming up the again and spawning in many of its thousands of tributary rivers and streams, parks and lakes are being developed on the sites of former steel works and mines as our region moves into the so-called post-industrial phase. Even in the most built-up cities, we can jump into our cars and, in less than an hour, enjoy clean green nature somewhere nearby. Generally, even the heavy industry we have doesn’t stink and we ensure that they have to spend a lot of money to minimise their impact on the environment. Moreover we’ve started to realise the long-term consequences of our life-styles and are working on our carbon emission levels, investing in renewable energy, fuel-efficient cars and trucks, research into carbon sinks, etc.

And there is a large amount of short-sighted, self-righteous hypocrisy contained in our position in the developed west.

Let’s look at coal-mining. In countries like and the it’s become history. This is not because the world doesn’t need coal any more or because the reserves have been mined out in , but because it is no longer economic to exploit those reserves here. In many other countries, like , the and, especially , they’re still digging the stuff out as fast as they can. So where’s the difference?

To some extent there is a minimal validity in the argument that in Western Europe, since the Industrial Revolution really got underway more than two hundred years ago, we’ve mined out all the coal that’s easy to get at so that it costs more to exploit the reserves that remain. But this is only a very small part of the reality. The basic fact is that coal-mining has become so expensive in the developed world because safety-standards have been continually raised – and enforced – in the past fifty years and because social developments led to mine workers being paid decently to do hard, dirty, dangerous work. An hour’s work for the few West European miners who are still around costs employers twenty euros or more. In and the it costs around a sixth of this, and a Chinese miner is lucky to earn a euro an hour. Furthermore, the ancillary costs for safety and environmentally sensitive production are much lower than those in and the cost of producing energy with locally produced coal, even inefficiently, are also much lower because all sorts of expensive emission and pollution controls are not required. So there are lots of areas in the world where it is still economic to produce coal – as long as the workers are paid badly to work under dangerous conditions.

Let’s follow the production chain a little further. Two weeks ago, a dam at a toxic waste reservoir in broke and a million cubic metres of red sludge spilled over onto the surrounding area, killing at least nine people, contaminating at least 40 square kilometres of land and threatening to poison the whole river downstream. The sludge was the by-product of an aluminium processing plant.

uses a lot of aluminium but it’s no longer processed here. It’s a dirty, energy-intensive procedure which makes it very expensive if energy costs are high and stringent safety and environmental standards are enforced. , struggling to catch up with living standards in and trying to remain competitive on the world market, offers cheaper energy, lower labour costs and less extensive safety regulations. And, should substantially change the rules relating to safety, the processing of aluminium becomes more expensive there and buyers on the global markets will buy elsewhere.

Beggars can’t be choosers. It’s a global jungle out there and the developed world is at the top of the food chain. One of the main reasons we in the West can increasingly look after our environment is because we can afford to. Having gone through our dirty phase, used it to reach a good standard of living for our societies and to achieve the position of global top-dog, we use that very position to profit from others who are farther down the prosperity scale. Having been the first to crawl out of the pit, we are now in the enviable position of paying others to dirty their hands and homes in a way we don’t have to any more. What’s more, it doesn’t even cost us that much because our demand controls the global markets and there are enough others farther down in the pit who will be quite happy with pittances; it’s better than the alternative – which is nothing at all.

This is one of the things which make global climate and CO2 emission discussions so intractable. It’s one thing for western nations to get all moral about global warming and the need to cap carbon waste production. From the position of the developing countries this seems more than a little disingenuous; having got to the top of the tree, the developed countries are saying that there’s not enough room there for everyone and if those farther down don’t become less greedy they’re going to bring the whole tree down. In the there are 700 cars for every 1000 people, in around 500 for every thousand. Reliable figures for and are more difficult to find, but they are somewhere between 10 and 25 per thousand. Don’t they have just as much right to have a car as we do? But, if every second Indian and Chinese person drives a car, then the global climate will be in bad trouble.

Inversnaid, the stream and waterfall in the Scottish highlands which inspired , is still there today and still as wonderful and wild as ever. It is not the prerogative of the Queen to visit and enjoy it – but, on the other hand, it is rather remote so the best way to get there is by car. It, like all the other natural (or re-natured) beauty spots in the developed world, remains the prerogative of an elite, those lucky enough to be born into the rich western societies. And it survives in all its beauty at least partly because other wild and beautiful areas of the world are being destroyed, so that its caretakers have the luxury to protect it.

I don’t know any easy solutions for all of this. I like my living standard here in the west, I like being able to jump in my car and in fifteen minutes being able to reach a number of streams nearly as beautiful – if not quite so spectacular – as Inversnaid. But I have the feeling that if we want to protect the millions of Inversnaids worldwide (and enable everyone to be able to enjoy them) we have to find different ways of doing things. And, in a world in which our global interdependence is becoming ever more deeper and complex, I suspect that we don’t have the luxury of going on as we have done and ignoring the questions – otherwise our whole lifestyles are going to fall down around our ears. My generation may be able to escape the worst of it, my children and grandchildren certainly won’t.